Game of Thrones is well-known for hiding all kinds of easter eggs in the show. Sharp-eyed superfans have noticed all kinds of interesting little details are hidden references throughout the series. Some of them foreshadow a character’s impending doom, while others are just a fun joke for the cast and crew. They’re all quick moments, however – take one quick trip to the kitchen, and you might miss them.

For those who don’t know, and easter egg is a hidden gem, a secret feature or an intentional inside joke. Think of it sort of like an actual easter egg hunt. Fans search for these underlying messages as clues to unlock hidden secrets, or simply to have a laugh.

Here are a few GoT easter eggs for you:

Well, not really. But there were two nods to the famous wizard in season 7. First of all, Archmaester Ebrose is played by Jim Broadbent, who was the man behind Horace Slughorn in Harry Potter. But the script takes this easter egg one step further. Samwell Tarly asks the Archmaester if he can go into the “restricted area of the library” inside the Citadel. Didn’t Harry ask him that same very thing at Hogwarts? This is one of the first major easter egg theories made by fans early on in the show’s run. Carved into the wood are the letters RL (as pictured), right next to Jon Snow. What does it mean? Glad you asked. R is Rhaegar Targaryen. L is Lyanna Stark. And together they made Jon Snow… Farfetched? Maybe. Maybe not.

It was the moment we’ve been waiting for – Theon finally saves his sister, Yara. It’s the least he could do after he leapt off the boat in season 7, leaving her to Euron’s mercy. Thank goodness Euron had other things in mind, like claiming Queen Cersei…I digress.

During their attack on Euron’s fleet, Theon and his gang killed many men. One right in the eye with an arrow! That man was Rob McElhenney the co-creator of It’s Always Sunny in Philadelphia. The link? David Benioff (co-creator of GoT) also wrote for that show.

4. Foreshadowing the death of Joffery, Shae, and Tywin You could watch the series straight through a million times and never catch all the secrets scribed in the script. Littlefinger, the sly menace he is, is (was) one character to keep an eye (and ear) on. In Season 4 he says:

“People die at their dinner tables. They die in their beds. They die squatting over their chamber pots. Everybody dies sooner or later.”

Sound familiar? Joffrey died of poison at the wedding feast. Shae died in her, or rather Tywin’s, bed. And Tywin himself, the patriarch of the Lannister family, died on the toilet.

5. Ed Sheeran was, in fact, killed off the show. 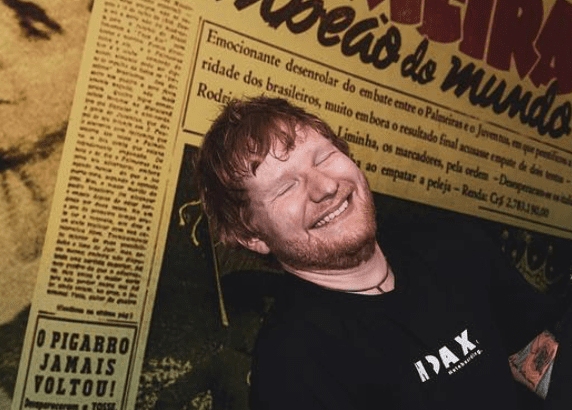 Remember when Ed was in season 7, singing songs with army bros and feeding Arya rabbit? Many people who watched where like, “Wha?” As a joke, the co-creators brought it back in season 8, episode 1. To teach us about Ed’s fate, the brothel gals chatted about him while—ahem—you know…with Bronn. They mention a ginger named “Eddie” who had his eyelids seared off…ie, he was killed by a dragon.

“You need enough faces that you don’t sense the repeats, but you obviously can’t face cast thousands and thousands of people because that’s prohibitively expensive. We used all the face molds we have ever used before. Both [series co-creator] David [Benioff] and myself appeared many, many times in the Hall of Faces … there is at least 20 or 30 of me in there, which is, I suppose, my cameo for the show.” 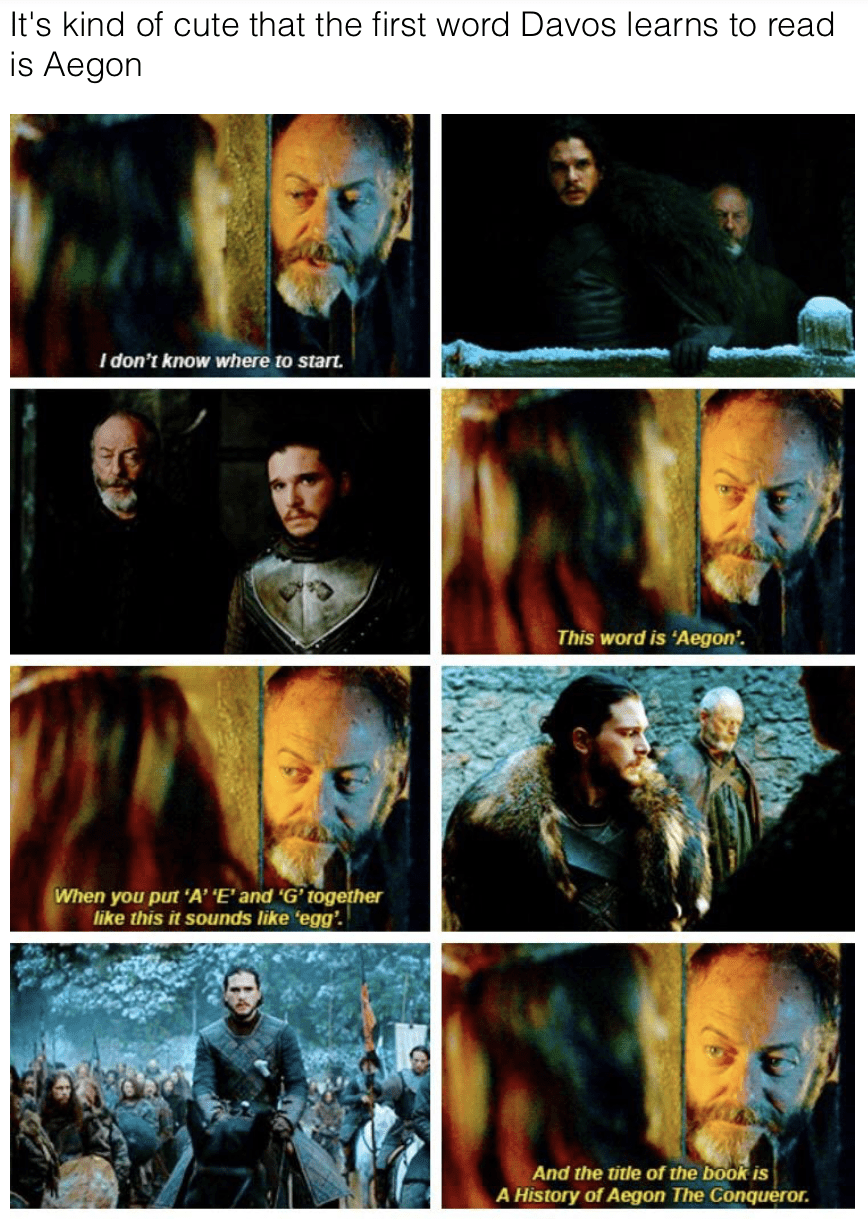 Davos may not seem like the smartest man, at least when it comes to books. After all, he can’t read – or at least he couldn’t at the start of the series. Princess Shireen Baratheon taught him early on, and one of his first words was Aegon. None other than Jon Snow’s real name.

Coincidence? It never is.

8. A regime never truly dies – just consult the furniture in the Red Keep.

While many may not have noticed, some of the furniture in the Red Keep (primarily in the Small Council room and Tommen’s bedroom) still has dragons carved into the wood. The co-creators left this element to show the history of the Lannister coup over the Targaryens. This is a subtle reminder to viewers about the long struggles between the two houses.

Costume designers take in every detail when designing the Game of Thrones garb. These garments are a major part of the show, if not an actual additional character. If you take a good look at Sansa Stark’s wedding gown (from when she wed Tyrion Lannister), you’ll find embroidered fish, dire wolves, and lions along a path. This is the journey from Sansa’s birth to her wedding day. And since Sansa is known for her mastery in needle and thread, it isn’t far fetched that this may have been made by her. Michele Clapton, a major designer on the show, said,

“The embroidery is a subliminal way to tell someone’s story. You can see the influence of her mother, Catelyn Stark, in the House of Tully fish that swim around her body, then the emergence of the Stark Direwolf and eventually the heavy stamp of the Lannister lion on the back of her neck.”

10. The Iron Throne pay homage to past fictional heroes 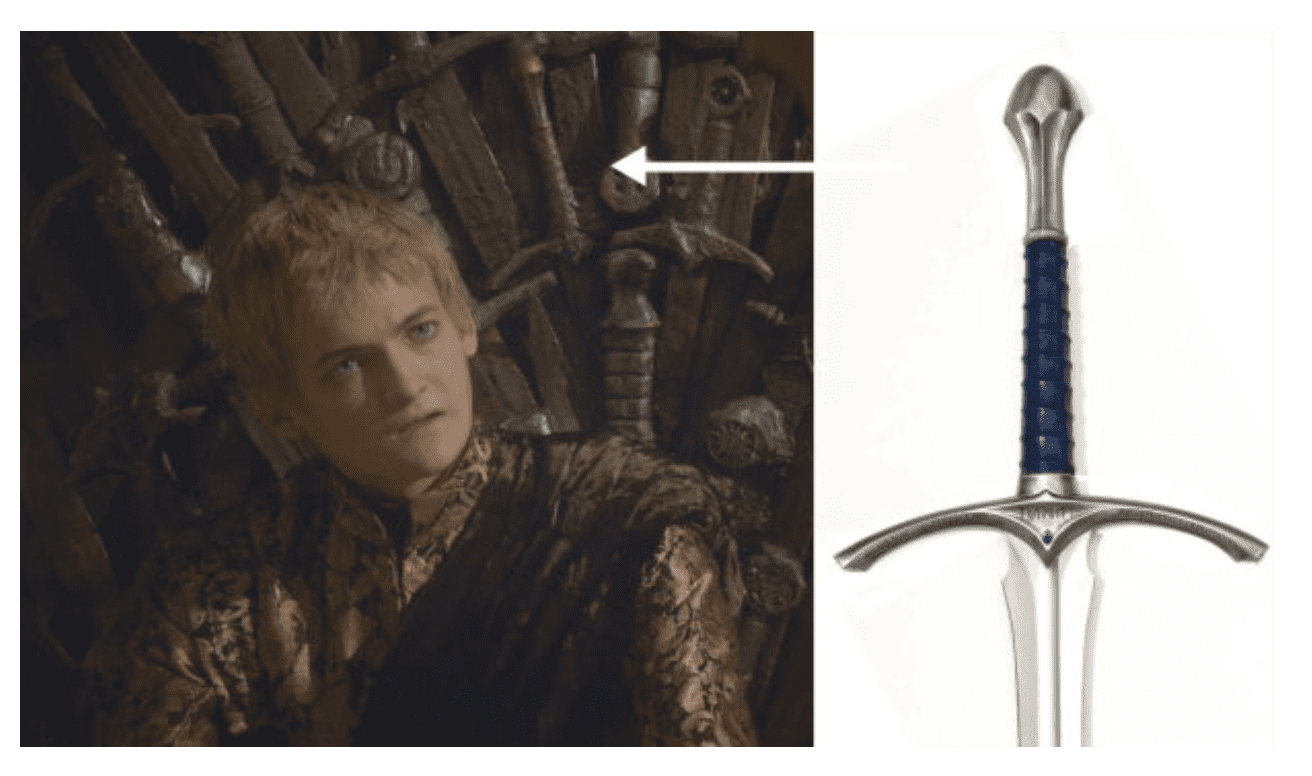 The Iron Throne, arguably one of the BIGGEST characters on the show, is hiding a few secrets of its own. Though it’s ostensibly made from 1,000 of the Mad King’s enemies’ swords melted together (actually 200, as Littlefinger points out), it has some hidden gems, such as Gandalf’s sword, Glamdring, from The Lord of the Rings.