A Beaver That Was the Size of a Bear: Meet the Now-Extinct Castoroides

There are times when you get kind of sad that a certain animal has gone extinct.

Then there are times when you hear “a beaver the size of a bear,” and know instinctively that would not be, in any way, shape, or form, adorable.

Meet the Castoroides, a giant beaver who surely could have built some truly impressive dams.

#EvolutionaryOddball: Castoroides, the giant beaver, lived in North America during the Pleistocene. They could grow up to 2.2m long & weigh well over 100kg. Scientists are unsure if Castoroides built dams. But, if it did, they were probably less complex than modern beavers'. pic.twitter.com/TYcuNpiBT5

Which, let’s just say up front, scientists don’t believe they did.

The Castoroides lived during the Pleistocene, a period in earth’s history that kicked off around 2.6 million years ago and runs until the end of the most recent ice age – that’s around 11,700 years ago.

The world was much colder than it is today, which made it idea for large animals to thrive. The larger one’s body mass, the easier it is to conserve body heat, and Castoroides was one of the products of this time.

This mammal, a relative of the modern day beaver, grew to more than 7 feet long, and could weigh up to 220 pounds.

It would rival the modern day black bear, as far as size and girth, and obviously, since modern beavers wear around 29-77 pounds, out-masses them by quite a bit. 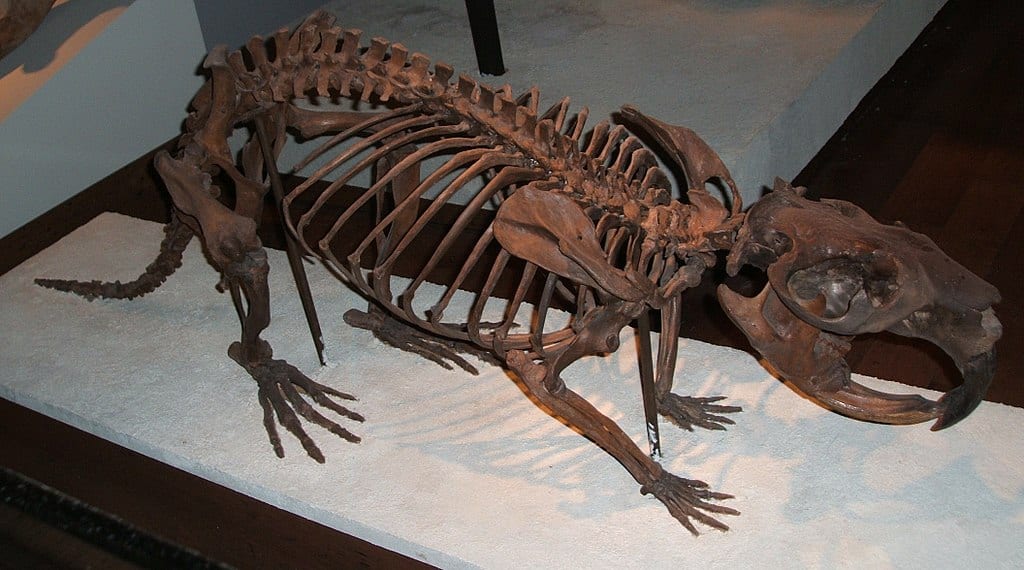 The ancient beaver had a narrower tail, shorter legs, larger hind feet, and did not eat the same diet as their modern day counterparts.

Even though Castoroides had 6-inch incisors, their teeth lacked the razor-sharp, chisel-like edges of today’s beavers, meaning they probably didn’t consume nearly as many woody plants and tree bark.

Scientists used isotopic signatures in Castoroides teeth to learn the giant beaver preferred to dine on softer aquatic plants – which could tell us how they died out.

Since it didn’t prefer woodland plants, there’s a good chance the giant beaver depended on wetland habitats for survival. They proliferated through the Great Plains, the Great lakes, the American South, Alaska, and into Canada for a time, but as North American became warmer and drier, food presumably became harder to find.

Modern beavers use their logging skills to reshape their habitat, creating new ponds when they need them, but without that skillset (and the teeth for it) Castoroides would have been, you know.

Up the proverbial creek without sharp enough teeth to ensure their survival.

Some believe Algonquin myths about “the Great Beaver”, a huge, magical, beaver that is ancestral to modern animals, are ‘fossil memories’ of Castoroides. The geographic range of the beaver/stories do correlate. However, this is unlikely, as it went extinct 11kya #FolkloreThursday pic.twitter.com/WXnkgMGabr

The sharp decline in natural wetlands is probably what caused these creatures to go extinct around 10,000 years ago.

I’m not sure I want to meet a beaver the size of a bear, even if his teeth aren’t sharp enough to cut wood.