Employers seem to have an issue staying out of their employees’ business these days – or at the very least, they’re struggling to find the appropriate line between work and personal life.

Which is, I think, what’s happened here, when a company’s HR department issued an official notice to an employee for not driving a nice enough car.

The letter begins by informing the person that “some” companies conduct credit checks to ensure their employs are able to make good financial choices (and apparently to rule out criminal activity), but they don’t do that.

we need democracy in the workplace to prevent absolutely insane shit like this pic.twitter.com/FUThHujgsv

Which would seem good, until the letter goes on a rant about the employee’s older car, and what exactly it says about him and, by extension, the company.

The letter goes on to say that, since they know what said employee makes, they are sure s/he could afford a nicer car, and the fact that s/he is not buying one is somehow suspicious. 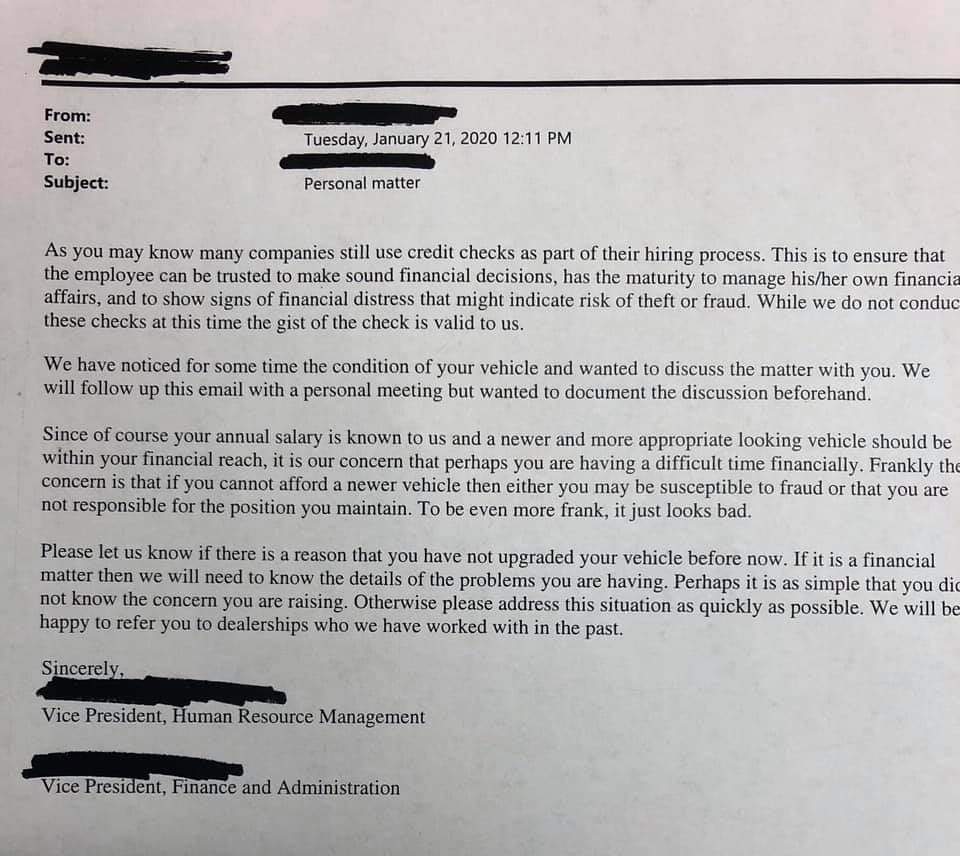 “Since of course your annual salary is known to us and a newer and more appropriate looking vehicle should be within your financial reach, it is our concern that perhaps you are having a difficult time financially,” the letter reads. “Frankly the concern is that if you cannot afford a newer vehicle then either you may be susceptible to fraud or that you are not responsible for the position you maintain.”

I have no idea what that even means, but it definitely feels insulting.

Which is exactly what virtually everyone on Twitter thought when they saw it.

“You look poor so we might remove your income” ???

What in the actual sake of flying fuck?? How about “I like my car and I have better things to spend my money on”??

Am I crazy or have I been out of a corporate environment too long? Its now reasonable for your employer to assume you’ll discuss your personal financial situation w/them & assert the right to have that (what should be) personal/private info? This reads as crazy invasive right?

That’s by far the weirdest employer complaint I have ever seen and think it should be illegal to threaten someone with termination because you dislike the car they drive. This is utterly insane.

The point is, it’s no one else’s damn business.