No, not the kind of crabs that you need to inform your intimate partner about, either. Those are scary, to be sure, but they’re not giant…and also we know how to get rid of them.

Instead of that horror show, try picturing this one: you’re enjoying a nice, relaxing campground getaway with your family. You’ve had a great day, and as dinner time nears, you bust our your grill and meats and get the BBQ underway.

A BBQ that’s soon interrupted by dozens of gigantic crabs crawling up the tables and over the chairs, all in search of food.

Probably not human food, but who are you to say for sure?

If you’re thinking this sounds like a bad horror movie, I doubt Amy Luetich and her family would argue with you, even if it did really happen to them.

Since the Luetichs are Aussies, however, they did not run away screaming. On a scale of 1 to those spiders that kill everything they touch, coconut crabs are nothing more than a source of entertainment down under.

The family smiled for the photos while the crabs nosed around like small dogs for food. They’re robber crabs (also called coconut crabs) and are the world’s largest land crustacean.

Which, of course they are, because we all know by now that Australia doesn’t do pint-sized anything. 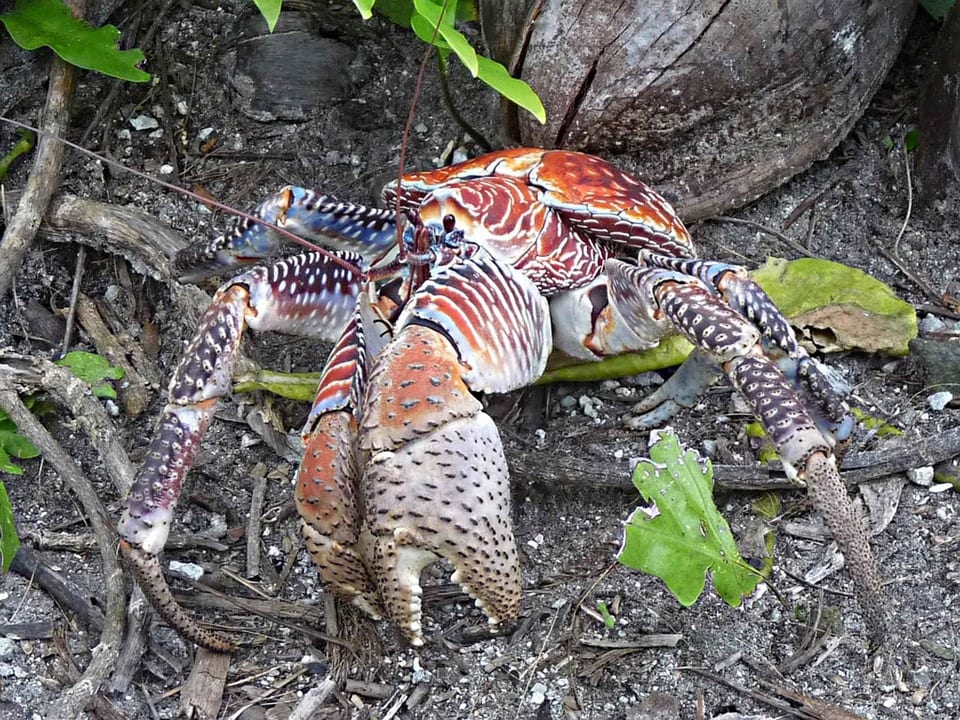 The grabs can weigh between 8 and 9 pounds  and grow up to over 3 feet in length (width?) so these guys will definitely let you know when they’re around.

And dozens of them?

I don’t think I would be as chill as the Luetichs.

I guess that’s why they get to live in Australia and I don’t.

The robber crab gets its name because they’re known for walking away with people’s belongings – including food, as they stole from the Luetichs – and are a protected species on Christmas Island, where the encounter took place.

Here’s a video of those crabs… um… robbing!

Leutick had this to say about the crabs…

“They started to climb up to the table, and another climbed onto the barbecue.

We kept our tents away from where we had eaten, but one of the families said the whole night they could feel one tapping on the outside of their tent.”

By the way, the crabs can live up to 50 years, so there’s a chance they talk about where to find the best human food and other things that catch their beady little eyes.

Anyone else thinking of the crab from Moana all of a sudden?