A Father Fired His Own Son. Was He Wrong?

It can be a great idea for family members to work together and other times…maybe not so much.

A father shared his story on Reddit’s “Am I the *sshole?” page about having to fire his own son and he wanted to know if he’s wrong for doing so.

Let’s check out the story.

AITA for firing my son from family work?

“Throwaway. First language is not English but living in UK for 10 years.My wife is from UK.

This is really creating problems in the house and my wife is currently at my MILs house. My son did not leave his room for a month except going to his therapist or to take his medications.

My son (21M) has returned to our hometown 5 months ago after 3 years failing at college also failing at various jobs he worked. He was graduated as a valedictorian at high school and was accepted to a really good college so it was a really bitter 3 years for all of us watching him fail.

When he returned to the home, we gave him 2 months to rest and then he started to work at my company as an intern. I thought it would help him develop life and work skills because he did not work until college due to really hectic school schedule.

In his first month,he was doing OK but at the second month,he started detoriating and he was really closed and only answered when he was asked something specific,also he started to come late and he was really looking dirty,also started to smell. His colleagues were really disturbed and one of them asked me to bring him to a therapist or call a therapist to his workplace.

I agreed and arranged a meeting with a therapist at our workplace with my son. At the end,he was diagnosed with cyclotymic depression with major episodes and therapist said he needs constant therapy and medication.

After all this news and with the complaints of my colleagues,I fired my son from the work.Well,this was big news for my wife and she accused me of infantilizing my son and never trusting. Well,I don’t. He is really incapable of taking care of himself,someone has to make him remember even to eat or take a bath or he just sleeps,wakes up and looks to the ceiling.

When I said this,she got really angry and said she was going to her mom’s house and taking our son,my son looked her and yelled “Leave!” She was scared and left the house and after that he started to cry and became a little kid.That night was hard and he was like a 10 year old in 21 hear old’s body.

I am currently at home most of the times and working from home,also the surges in the COVID cases in my area made it more possible.Also we are a healthcare software company for hospitals so WFH is really possible and I only go to in person work maybe once a week.

My wife is currently looking for divorce attorneys and even my mom and dad are accusing me for finishing my marriage. They all think my son has something he can come over and I am overreacting.

The only support I have is FIL(him and MIL are divorced since my wife was a little baby) and he is currently living with us helping me taking care of him. We are taking really slow baby steps and his psychiatrist said if it wasn’t COVID,he would be hospitalized to a mental health care clinic. He currently started to eat a full meal and we are really glad.

AITA for firing my son from family work?”

Here’s how people responded to the man’s story.

This reader said that the man’s son probably needed to be fired because it’s obvious he can’t handle any big responsibilities right now. 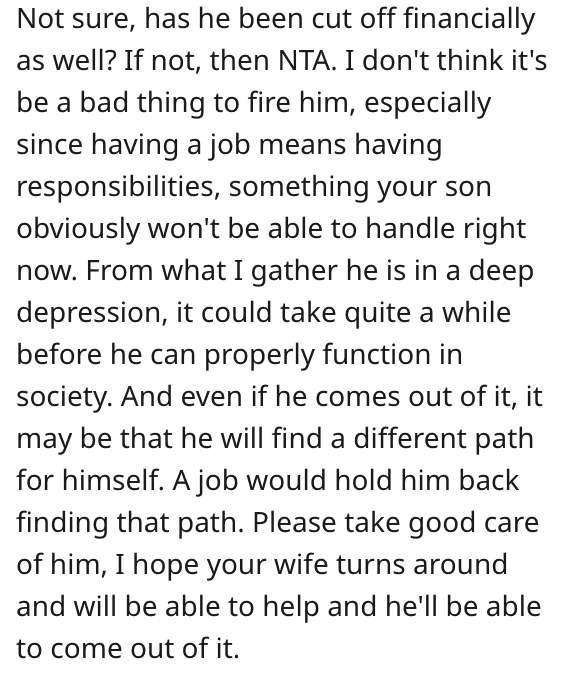 Another reader said that the man’s wife clearly isn’t grasping how serious the situation is or what their son needs right now.

This Reddit user pointed out that the son might need full-time care…and that his father isn’t the one who should be handling this.

Finally, a person argued that it just doesn’t make any sense for the man’s son to be working at all during this time. And maybe the whole family could use some therapy… 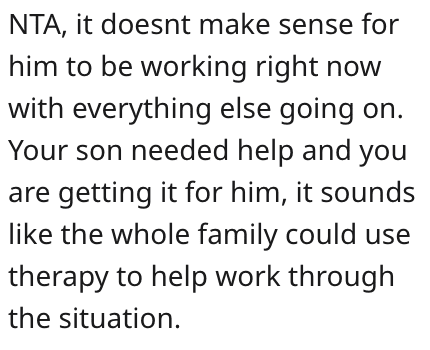 Was this dad wrong for firing his son?

Talk to us in the comments and give us a piece of your mind.