You hear stories all the time about moms and dads not being in their kids’ lives for one reason or another, but this one is a little bit different.

A father took to Reddit’s “Am I the *sshole?” page to ask if he was wrong for telling his 19-year-old daughter the truth about why he wasn’t in her life while she was growing up.

AITA for telling my daughter the truth about why I wasn’t in her life?

“To start, my ex and I were 19 when she got pregnant. We had recently broke up and she found out a couple weeks later that she was pregnant. She said she planned to get an abortion but only wanted her sister there.

So I was always under the belief that she had aborted. She only contacted me once saying it was done and we didn’t speak again.

Fast forward 19 yrs later, I found out a month ago that was a lie. My ex passed away 3 years ago and my daughter Kara has been living with her uncle.

He was the one to reach out to give me a heads up after she expressed an interest in wanting us to connect. He and I spoke at length because I was feeling some pretty strong emotions like rage for never being told about her.

My ex had backed out of the abortion but didn’t want me involved because we were broken up so decided just not to tell me. But he told me that Kara doesn’t know about that. Apparently I wasn’t ready for fatherhood because we were both young so I bailed.

I couldn’t believe it. Rob (her uncle) told me he knows his sister was wrong for that but promised Kara doesn’t have any negative feelings towards me and my ex never painted me as some villain, just a young guy who knew he couldn’t properly care for her.

He asked me not to tell Kara this when we talk if she asks and because it could hurt the way she saw her mom. I never actually confirmed I would.

Kara messaged me and we’ve been talking. I’ve met her twice and it’s been crazy emotional. Looking at this girl who looks just like me and hurting that we’re just barely getting to know each other

So far our conversations have only been about what her life was like, how my life is, what her wants/future goals are, and getting to know each other.

We met again Tuesday and she finally decided to ask the obvious questions about what made me not be involved. How did I feel, what went through my mind, did I ever think about her,etc.

I had been thinking about what to do but in that moment I just didn’t have it in me to lie so I was honest. That I was told about the abortion, had no idea she even existed until now, but that I still really want to be in her life and have the chance to be her father if she wants that. Kara was a bit emotional, we talked some more, and said she still wants me involved.

That night my messages were blowing up. Not just from rob but her grandparents as well. They’re all outraged for telling Kara about her mom because she yelled at all of them and is refusing to even take their calls.

Yes, the lie was terrible but I just ruined the image she had of her late mother for my own benefit. Rob called me a selfish d*ck for not taking into consideration how this would affect Kara finding out about this.

So right now I feel like sh*t. I get “honesty is the best policy” but in this case I don’t know if I was an *sshole for doing it. I’m still learning this whole “dad” business so don’t know if I dropped the ball here.”

Here’s how folks on Reddit responded to the story.

This person said that the man is not wrong here: his ex clearly created this whole mess.

Another reader said that this story is even worse than the typical “deadbeat dad” story because the girl was lied to from the very beginning. 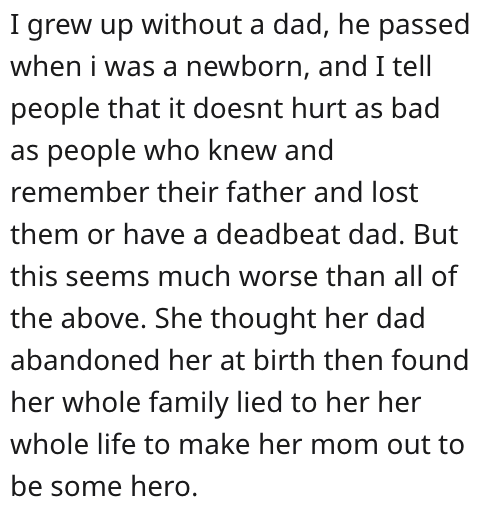 This person said that the man is definitely not the *sshole here and that the entire family lied to the girl about what really happened.

Another individual said that the man who wrote the story really had no good choices here, but it wasn’t his fault. He was ultimately put into this situation because of the lies of his ex and her family. 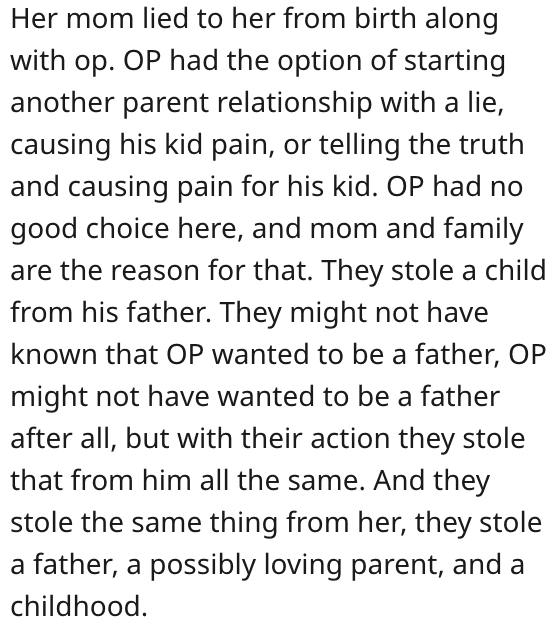 And finally, this Reddit users said that the man had to tell the truth and another lie would have prevented him from having any real relationship with his daughter in the long run. 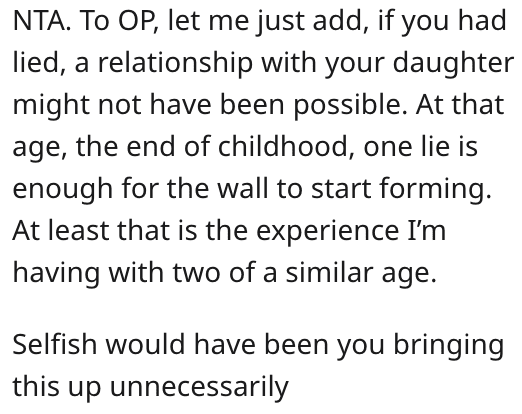 Do you think this man was wrong in his actions?

Or was he justified?

Talk to us in the comments and let us know what you think.