A Woman Asked, “Am I Wrong for No Longer Cleaning Up After My Boyfriend?”

I know that everyone can be lazy, and that we all have those down days when we don’t feel like being a responsible adult and taking care of ourselves and our space.

Just my personal observations, you understand.

This woman is finding herself in one of these all-too-common relationships, where she’s been the one cleaning up after her partner like she’s the only adult in the home.

She gives a few specific examples, like how he refuses to put the scoop for the cat food back where it goes. She’s started leaving it where he did, which he, of course, finds annoying.

I have come to realize my bf rarely moves items back to their original homes. Yes, I have talked to him about this and we haven’t resolved anything, hence the post here.

So, my boyfriend will not put anything back to where it should be. This includes kitchen utensils (I’m not OCD, I just think the cutting knives should go near the cutting board), toilet paper, qtips, and most recently, the cat food feeding scoop.

Specifically, he feeds the cats in the morning, and leaves the scoop by whoever he feeds last (they’re all fed in separate rooms, we have a fast eater). I feed the cats at night, and have to wander around until I find it, and then I put it back in with the cat food, which is where he goes in the morning. I started replacing it to exactly where he leaves it now, and he’s getting annoyed it’s not in with the food in the morning.

Then there’s the toilet paper, which she now totes around to see how long he will go without replacing the roll, and the Q-tips he would rather forgo than replace.

Toilet paper. He will never replace it. So I started bringing my own roll into the bathroom, and if the bathroom roll is empty, I don’t replace it. This goes for the qtips as well. He won’t replace them in the bathroom. I have not replaced them in a month and it seems like he just stopped using them…

He doesn’t even empty the grocery bags, just shoves them in their general locations and assumes she will empty and organize things later.

Things came to a head, here, when he accidentally put some chicken into the pantry that went bad.

Finally, when we go grocery shopping, he just shoves all the bags into the fridge/freezer/pantry for me to empty later. I have stopped emptying the bags and organizing the fridge, and just remove my item from a bag and leave it as it was.

This probably upsets him the most, since last time he put a pack of chicken in the pantry last time, that I “didn’t notice”. I really didn’t notice it though, that’s what he said to me. I assumed he at least checked the bags to be going in their general locations.

Is she wrong? Is he right to be upset?

Anyway, we have been fighting about this and today he got upset the cat food scoop was not with the food, and in the kitchen (where he left it).

AITA for trying to make a point that I can’t constantly be fixing everything?

I think (hope) you all know the answer to this one, but let’s check out the comments just the same.

The grocery bag thing is just a whole new level of lazy. 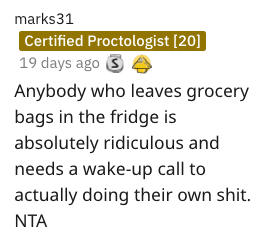 And no, it’s not her job to “raise” him. His mother should have done that. 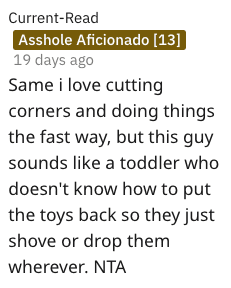 Every action has consequences. It’s about time he learned that, even the hard way. 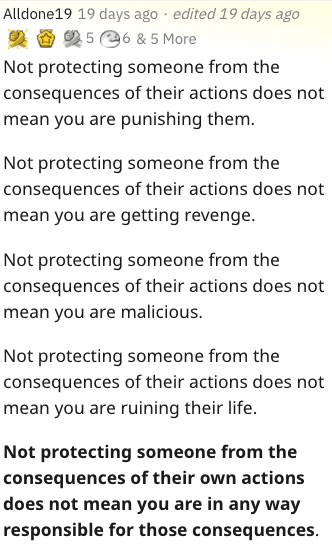 There did seem to be a consensus on where at least part of the blame here does reside. 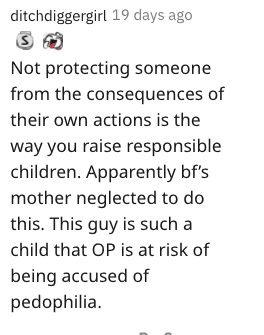 It’s the infuriating expectation that SHE do it that really did people in. 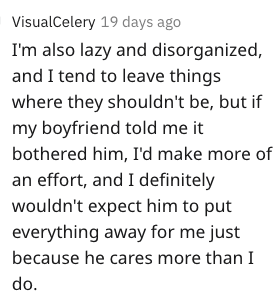 I think the fact that they’ve already had discussions about this actually makes it worse. She’s told him it bothers her, and not only does he not make an effort to change, he expects her to pick up his slack.

Give us your take on it in the comments!