Weddings are supposed to be one of the happiest days of people’s lives, but in the modern world they can often be a source of conflict, stress, and anxiety instead – often because people won’t mind their own business.

At the end of the day, weddings belong to the bride and the groom, so if they’re making decisions that are personal to them and aren’t hurting anyone else, what’s the beef?

This bride found out the hard way that someone will always have a beef when she (a deaf individual who is marrying a deaf individual) chose to have her wedding conducted in ASL (American Sign Language).

She was born deaf to hearing parents, who never learned nor encouraged her to learn any kind of sign language. Instead, the got her cochlear implants and basically pretended she was an average hearing child.

I’m(24F) deaf and growing up my parents got me bilateral cochlear implants and forced me into mainstream school, never taught me sign language and never immersed me into my culture as a deaf person.

They were actually pretty against me using ASL at all.

Well I took ASL in high school against my parents wishes and then got into a deaf university.

She finally felt accepted when she attended a deaf university and learned ASL – and bonus, she also met the man she wanted to marry.

His family is full of deaf people and tons of deaf acceptance, which she loves.

Although I couldn’t sign fluently when I started, I finally felt accepted and understood, the deaf community was nothing but welcoming.

I became fluent in ASL after a few months and stopped wearing my processors completely as there was no need for them any more.

I honestly didn’t realize how alone I had felt until I didn’t feel that way anymore.

I also met my fiance at college, he is from a very large family of deaf people. Everyone he knows even in his far extended family is deaf, HOH, CODA or SODA and everyone is fluent in sign.

I love his family so much.

Since the majority of their guests (including the bride and groom) are either deaf, hard of hearing, and/or know sign language, that’s the language they’re planning to hold the ceremony in – and they plan to have an interpreter for those who are “signing impaired.”

We’ve been together for 4 years now, he proposed last may.

We’ve been planning the wedding and decided to have it fully in ASL, the pastor at our churches deaf program agreed to do the ceremony.

My extended family of hearing people is very small, just my mom, my dad, my sister, my brothers, my aunt, my uncle and my cousin(my cousin is learning sign).

Whereas my fiancé’s huge extended family who are all deaf or sign fluently will be there and most of our friends are deaf or know sign.

We decided to get an interpreter for the hearing people though so they’d know what was going on. Our wedding is in August so we just sent the invites.

The invite mentions that it will be in ASL but will have an interpreter for those who are “Signing impaired” which is kinda just a joke.

Her mom is pitching a fit about English being the primary language here (?) and complaining that since the deaf folks are “used to using an interpreter” it will be easier for them, and she’s got her daughter questioning her decision to hold HER wedding in what she considers HER primary language.

But my mom started texting me and tried to convince me that it should be in English and have an ASL interpreter.

I feel like it’s our wedding so we should have it in our first language but my mom thinks that we are in America so english should be the first language and anyone who doesn’t choose to “get cured”(Get an implant) should get an interpreter.

She also said it was disrespectful to say “Signing impaired” I don’t think she realizes the irony as she always refers to me as hearing impaired.

During the entire conversation she kept repeating that ‘I should have never let you go to that school.’

My mom also says that the deaf people should be used to having interpreters whereas she’s never had one before so it will make it harder to understand.

AITA here? Should I just have the ceremony in english because I guess that’s the more normal way of communication even though we consider sign our primary language?

Reddit’s blood is boiling, y’all, and so is mine.

Can we just agree that her mom is being not only ridiculous, but harmful? 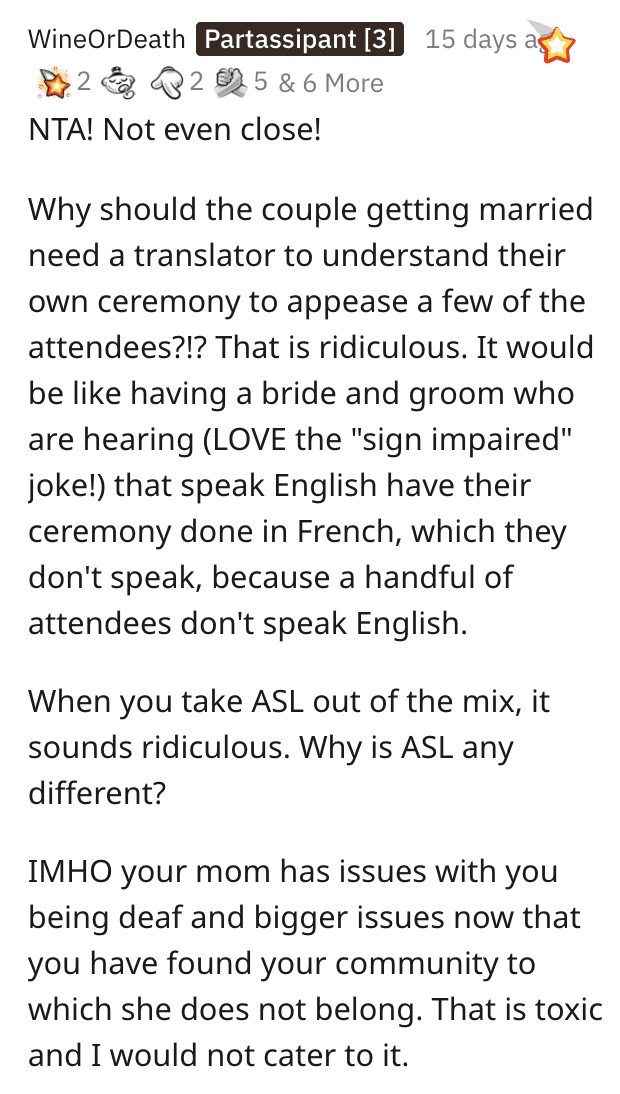 This is definitely a case of “one party is clearly wrong.” 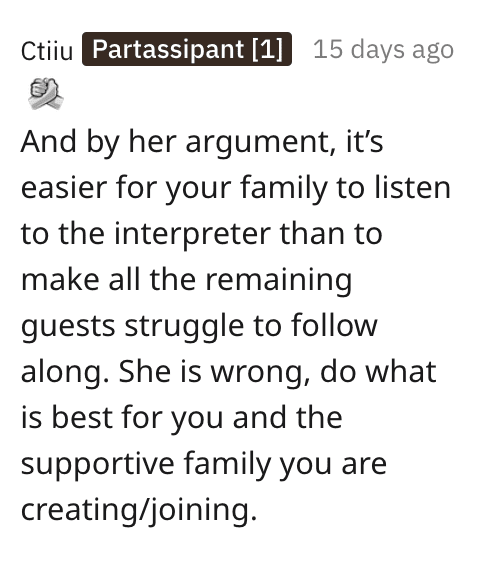 Not to mention, her argument really doesn’t make any sense.

I mean, these parents. Ugh. 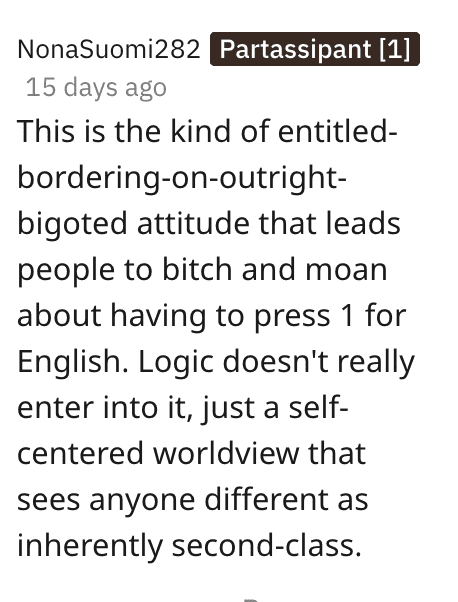 I need to go take a walk and calm down after this one, y’all.

If you want to rage with me, the comments are open!