Do you need a healthy dose of girl power this morning?

Epic moments like this hard to come by, but this fiery exchange was luckily all caught on tape. Here’s that priceless video of Caitlin leaping into action.

Apparently, the confrontation perfectly lines up with popular music trend that’s taking the internet by storm. So, Caitlin decided to sync her takedown up with the tune for all to see.

According to Caitlin herself, this is the peak of their face-off. It started off with her locking eyes and staring at the man, in an effort to hold him accountable without directly getting involved.

After about a minute, the man ramped up his harassment of the other woman. So, Caitlin finally decided to speak up.

Here, Caitlin recalls some more of the details of this encounter.

The woman who was unfortunately the target of harassment kept giving signals to Caitlin via eye contact, which is what made her feel obligated to speak up in the first place.

Caitlin also says that although she didn’t get to speak with the woman afterwards, she wanted to keep the focus away from her, anyway.

So, she just kept the harasser occupied in a roughly 20-30 minute back and forth about why you shouldn’t be trying to make unwanted moves on the subway in the first place. 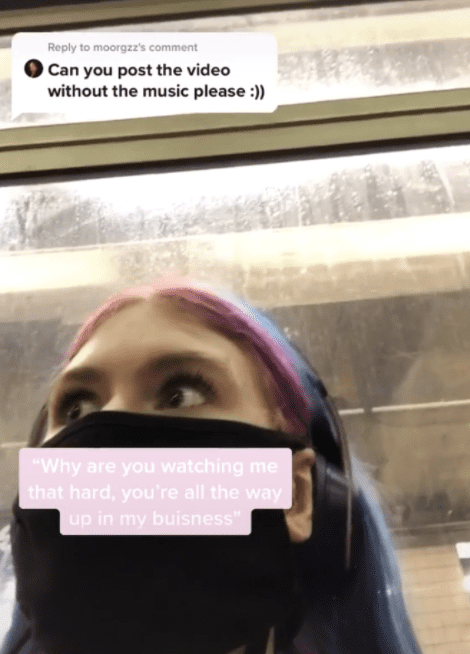 Good thing we have everyday heroes like Caitlin to do the right thing when the time comes.

Have you ever stood up to any jerks in public? Share your story with us in the comments!