Creepy Kid Tweets You Definitely Shouldn’t Read in the Dark

I don’t know why kids can be so incessantly creepy sometimes – they see things, they “remember” things, they tell you thinks, they sense things – but it seems to be something of a universal truth, doesn’t it?

So when @karnythia asked Twitter for stories about the creepiest thing a kid has ever said to them, well, people responded with some doozies.

People who interact with kids, what is the single weirdest/creepiest thing a kid has ever said to you? It's Saturday night so why not creep yourself out? pic.twitter.com/6pK92nOkmG

I’ll just be over here reading those under a blanket, yeah?

14. Well that’s not unsettling at all.

Maybe get him a train set to keep him happy.

Woke up in the dead of night, in total darkness. Thought someone had called for me, but all was quiet. Didn’t notice that my 3 yr old had crept in and was standing directly beside my bed until he whispered into my ear “I used to have a train-set when I was a grandpa.” 😳 🚂 👻

13. I bet his parents have trouble finding babysitters.

I hope she got out of that basement immediately…or at all.

A kid I babysat once asked me to play in the basement and when we were down there playing he said “When they put you in a box and nobody can hear you. Nobody can hear you down here either.” Then he bit me. 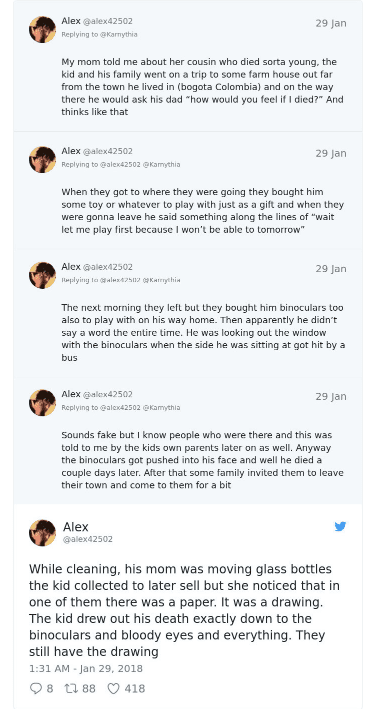 There’s also a ghost right there.

My Aunt died when my niece was a month old. When she was like 3 or 4, she asked to go outside and swing so I took her. Her other swing was moving but I thought it was the wind. My niece started talking to it i asked who she was talking to & she said ‘Annie Mae Adams” (my aunt)

“Everyone he likes.” Eep.

He was an only child so I was confused as to who tf “us” was. I called his mom to say we’re locked in the basement and she goes “I told him not to do that. He likes to keep everyone he likes down there” pic.twitter.com/yFKRjx5Faj

You can cleanse the closet later.

Putting my half brother down for a nap he goes. “I can’t sleep with that mean little boy staring at me” *points to the dark closet*
We didn’t take a nap and went to the beach instead😂

8. So many kids tell some version of this story.

I wonder where they hear it, or…you know.

My daughter told me that the “place” she was in before she was born had a bunch of babies waiting to be born. Except they aren’t babies there. “They’re all 5 and they pick their mom and then they go in her tummy”.

7. He probably meant it in a sweet way…

This was my first.

At the store. We’d had a nice day, picnic at the park.

Suddenly, he grabs my hand, squeezes REAL HARD and says, “Mama when you die, I’m gonna make a little-you so I can keep you always. Like with your skin, and eyes, but probly not your insides.” All smiles.

6. Maybe it’s time to consider this who reincarnation thing?

Because kids seem to have boarded that train.

I had just bought my kid a white stuffed bunny. His response “when I was your dad I got you one just like this, then you didn’t see me anymore.” He’s named after my dad, who I didn’t see for 12 years after he gave me the bunny (we talked when I was 14, he died the next year).

5. Kid knows how to take out the competition.

I’d keep an eye on that one.

4. Totally thought she was going to say “hair.”

I woke up to 3 yo kid #4 petting my head. I asked what she needed and she said ‘i wish i had a piece of you that i could carry with me all the time. like your finger.’ Haven’t slept soundly since.

But maybe call and exorcist, just in case.

This was the same week that flight from Malaysia went missing.

2. What active imaginations they have.

Hahahahaha *looks behind me*

3yo alone in the tub, sitting to one side, starts getting visibly upset at nothing on her left side, “Tell him I don’t like that! Tell him to leave me alone!”
She started crying uncontrollably, “He won’t leave!”
(Reader, I got her out of the tub immediately.)

1. Just TRY to stop yourself from looking behind you.

Once when my daughter was 4, she waiting for me at the end of the hallway. When I reached her, I said, “come on, kiddo. Let’s go.” And she said, “mom. I’m not waiting for you. I’m waiting for them.” Then pointed at the empty hallway and smiled.

I am dreading the day one of my boys busts something like this out, because eek!

Has your kid ever said something to you that belongs on this list? Please tell us about it in the comments!