Isn’t it kind of mind-blowing when folks in positions of power just don’t listen? At all?

Especially when it comes to good business practices?

You bet it is! But it seems to happen all the time…

And this person shared their story about a work snafu that really could have been avoided if people had just listened to them.

Angry because I keep asking for clarification so we aren’t wasting money? Have fun explaining why we just blew $90k for no reason.

“I worked in the logistics department of a fairly large company. My job is to check our system for orders that come in and to arrange the shipping for them. When the orders come in, they include the date that the material needs to be delivered by.

There are times that our materials planning team makes a typo and inputs the wrong date, but it’s rare. Our company is huge on having work instructions and standard processes for everything we do. My work instructions say to plan the shipment to deliver to the need date in the system.

There is one material planner who has a history of inputting the wrong date. I had to ask her a number of times in the past to verify the date, and she would go in and correct it. there were a few dates that looked wrong, so I emailed her and asked her to confirm.

She flipped out saying that she isn’t making those mistakes anymore and I am wasting her time. She reported me to my manager for not following the process or my work instructions, and he flipped out saying I am going against our “Lean” company culture and that I will be written up if I go outside of process again by emailing the material planner.

A month or so later, I see an order come into our system. A huge order with a combined weight of 30,000lbs. I check the need date and it needs to be delivered in 3 weeks to Colorado, and it’s currently in India.

I know what project this is for and the need date definitely isn’t right. This stuff has at least 2 months before it’s needed on site due to build delays. The material planner never updated the need date to reflect those delays. so what do I do?

I check the work instructions my boss wrote, and it says that if an order can’t make the need date in our system via ocean then it needs to go via air. I sure as hell am not going to email the planner to ask for verification after what happened last time.

So I get in touch with our logistics company and it’s going to cost close to $100k to fly the material from India. That’s $90k more than shipping it via ocean. I set it all up and once it gets loaded on the flight, I send the material planner the documentation.

It wasn’t even 2 minutes before she calls me flipping out. I tell her I planned the shipment to deliver by the date she requested, and there is silence. After a long pause I say “is there anything else I can help you with?”. She hangs up and my manager calls also flipping out. I tell him I did exactly what he told me to do, and I followed the instructions he wrote.

HR and upper management launches an investigation and I’m cleared of any wrong doing. I was specifically instructed to not go outside of the work instructions my manager wrote.

The material planner is written up and my manager gets in deep sh*t because he forgot to add an approval process for shipments over $15k to his wonderful work instructions like his manager had asked him to.”

Let’s see how people responded to this story.

This person made it pretty clear: this person’s co-worker is just plain DUMB.

This reader made a great point: “cutting the fat” isn’t always a great idea when it comes to business because those folks play important roles. 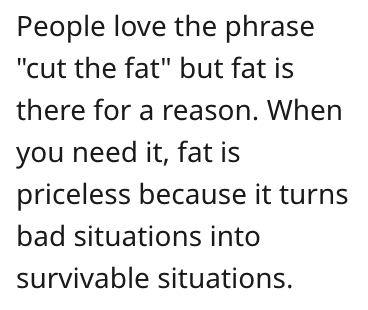 Another person said that stating facts doesn’t equal criticism. And anyone who thinks so is WRONG. 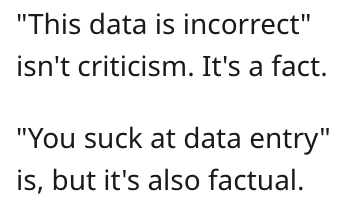 This reader said that the woman and the manager likely acted this way because they felt threatened…even though they were making mistakes. 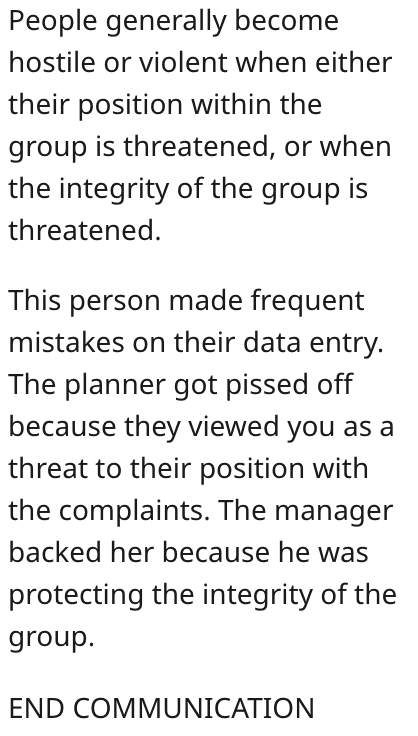 What do you think about this story?

Spill your guts and let us know in the comments.

We look forward to hearing from you! Thanks in advance!