Sophie Turner, whom most of us know as Sansa Stark on HBO’s Game of Thrones, doesn’t shy away from controversy. She’s a fiercely outspoken person who always speaks her mind, regardless of the potential blowback.

Turner has spoken out on mental illness before, and her recent foray into the Twitter swamp seems to suggest that the issue remains near and dear to her heart. 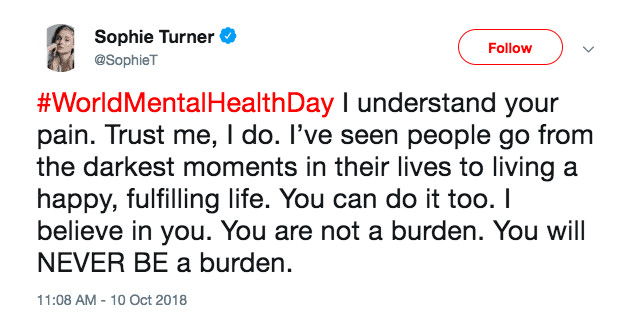 Her latest Twitter diatribe about why we should never joke about mental health is one we should all remember, so let’s go to school, shall we?

It began when Piers Morgan, famous jerk, popped off about how he agrees celebrities are trying to make mental illness “fashionable” and perhaps they’re not really suffering. He was responding to an original comment from Beverley Callard, an English actress who talked about her own struggles with depression in an interview.

“Real mental illness is very dark and it takes a great deal of strength to ask for help. I think we are now definitely chipping away at the stigma. But we have to be careful mental illness doesn’t become like a Gucci handbag. There is a danger it can become ‘fashionable.’”

The last sentence, obviously, is the bit Piers Morgan agreed with and many people, Turner included, couldn’t take sitting down. 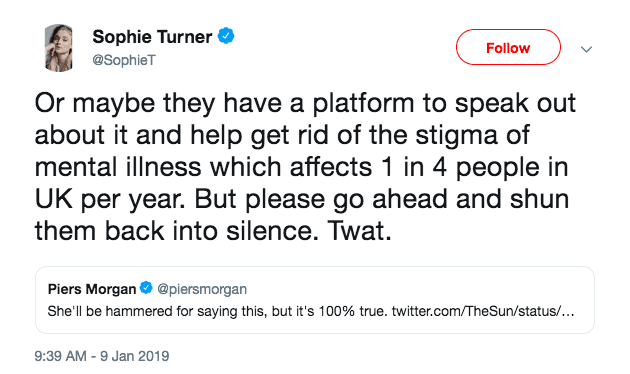 I’m not sure how Callard could say in one breath that we’re making headway when it comes to de-stigmatizing mental illness, then in the next breath say that celebrities were in danger of treating them like a new handbag. Actresses like Julia Louis Dreyfus spoke out about their breast cancer and treatment, yet no one would think of accusing her of trying to make cancer “fashionable.” So why should mental illness be any different?

Every voice counts when it comes to fighting the battle against mental illness, so people should speak their truth if they feel comfortable, whether they’re celebrities or not.

Because the best way to change minds, hearts, and, eventually, the healthcare system is to make every single person realize there is someone in their life who has struggled, is struggling, or will struggle with mental illness.