Here Are Some Secrets of the Disney Park Character Life

Disney Parks are supposed to be the happiest places on Earth. When you enter Disney World or Disney Land, you’re guaranteed a magical experience. You ride the rides, see the parades, enjoy the shows, but most importantly, you meet the characters.

Meeting Disney characters is one of the biggest highlights of visiting a Disney Park. There’s nothing quite like seeing your animated hero in the flesh (or fur) and then receiving a big hug! Some of the most magical moments come from these improvised interactions, but what do you really know about the performers who fill your vacation photo albums?

As protective as Disney can be of its beloved brand, past Disney employees are happy to spill the tea on some of the joys and struggles of becoming a Disney cast member.

1. First you have to land the part.

Becoming a Disney costume character is not an easy feat. Thousands of hopefuls audition to portray their favorite Disney icons every year, and only a select few see this dream turned into a reality.

There are two types of character actors at Disney world: face and fur. Fur characters include Mickey Mouse, Minnie, Goofy, and all of the other animated characters that are best represented with large, furry costumes. Face characters include anyone who wears make up instead of a giant head. This includes characters like Princess Elsa, Belle, or Mary Poppins.

Those planning to audition should be prepared to spend one to six hours at their character call. Everyone will be evaluated based on their height, overall appearance, and whether or not they fit what Disney is looking for right now. You might make the perfect Alice, but if all they’re casting for is Mulan, prepare to be cut.

In fact, double check what characters they’re casting for before you go. Actors are only allowed to audition once per year, so don’t throw away your shot!

2. You have to have the Disney look.

Character actors are hired this way because they are expected to share their character costumes with one another. Instead of making a costume to fit each actor, the actors are expected to fit the shared costume. Because of this, there are specific height and weight requirements that all cast members must meet.

The same goes for the male characters. Adult male characters like Tarzan, Gaston, and Kristoff must always be 6-foot to 6-foot 3-inches tall, whereas a character like Peter Pan will always be shorter.

If you’re not cut within the first round based on appearance, you might be asked to learn a short dance routine or improvise an imagined encounter. Cast members have to be able to think on their feet and improvise when interacting with guests. This is part of what makes meeting them so magical.

If you make it far enough you’ll be outfitted into a character costume and wig for the final round of callbacks! A professional cosmetologist is brought in to do your makeup and fit you with the wig. Each face character has a specific, signature look that all actors are required to learn once hired. This is to ensure consistency across the board.

No matter which Tinkerbell you meet, she will have applied the signature “bright sun yellow” eye shadow with a brown contour in the crease. 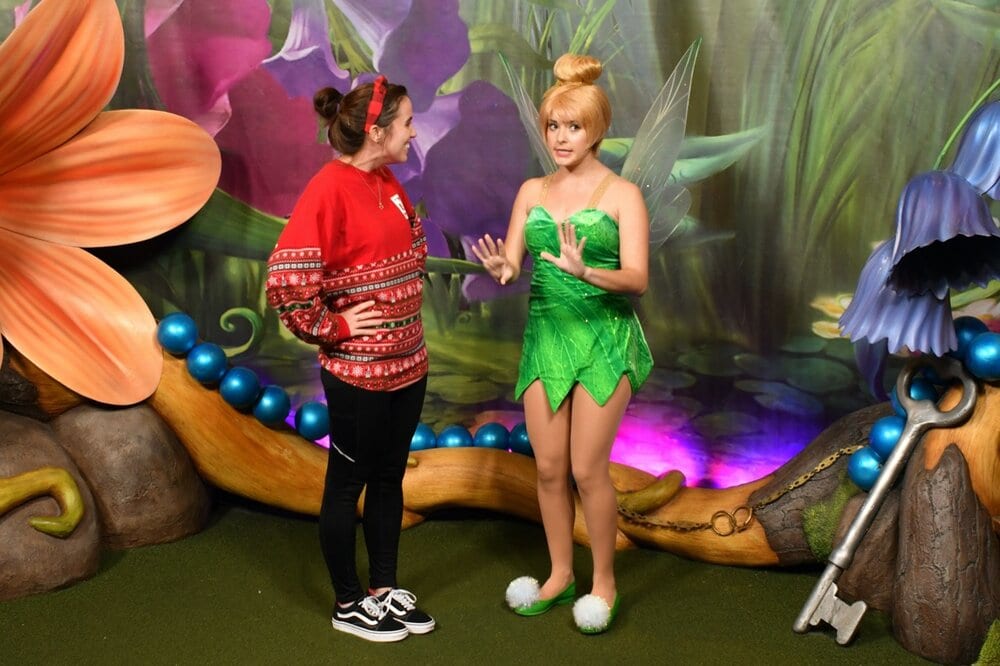 When you work for Disney World, you are signing on to be a player in the largest, never-ending theatrical production. Everyone who works at the Disney parks is considered a Disney “cast member,” and once you’re on site you’re expected to be “on” at all times. This includes following Disney’s strict rules about dress and park conduct.

Working as a fur character is not always fun and games. Those adorable suits can actually weigh up to 47 lbs, and have been cited as the cause of multiple injuries. Also, park-goers have been known to get physical with fur characters. Just because fur characters have some extra padding does not mean you can punch or slap them without doing damage. Best to keep it gentle.

In 2005, Walt Disney World reported 773 injuries to OSHA for employees portraying one of 270 different characters at the parks.

Of those injuries listed, 282 (roughly 36%) were related to costuming issues, such as costume weight affecting the head, neck, or shoulders.

Plus, those suits get hot, especially in the summer months. There are strict rules about how long fur characters are allowed to greet guests outside and inside, and it’s company policy that they spend just as much time resting as they do performing.

For such a coveted role, the compensation for playing a face or fur character at Disney World isn’t that much more than one might make working in customer service. The average pay for a fur character at Walt Disney World in 2014 was $10.10 to $14.66 an hour.  Face characters are paid more, about an extra $3.25/hour, a the form of a “face premium.”

However, all cast members can also take advantage of amazing park perks, including free entry to your parks any time, discounts on all merchandise, free tickets and entries for friends and family, food discounts, and more!

It seems that what character actors might lack in riches, they make up for in discounts and magical moments.

Despite the heat, the strict rules, and the middling pay, at the end of the day, Disney cast members get to make dreams come true.

Their job is about forging a connection with another human being, and bringing joy to their heart. Sometimes that means interacting directly with recipients of the Make-a-Wish Foundation or comforting a child who’s recently experienced a horrible tragedy.

It’s these moments of Disney magic that motivate cast members, and keep guests coming back.

I don’t know if I could handle being a Disney costume character. The size requirements would probably be too stressful for me.

Knowing what Disney cast members go through to make our fantasies come to life, I have a deeper appreciation for those family photos my parents took on our first trip to Disney World. And now I’m itching to go back!

Do you have a magical Disney park memory?