It might seem a little backward that a film genre meant to ramp up and maintain the viewer’s anxiety (if well-executed) could in any way benefit someone who is already struggling to control theirs, but hear me out.

Or, hear out Hayley Williams, who suffers from anxiety but has been self-medicating with horror films for years.

She describes her attacks as “chest-tightening, your breathing becomes erratic and your hands start to sweat,” and says that “for most people, this may describe the physical experience of watching a spine-chilling horror movie. Yet for some anxiety sufferers these symptoms just need a good jump scare to resolve.” 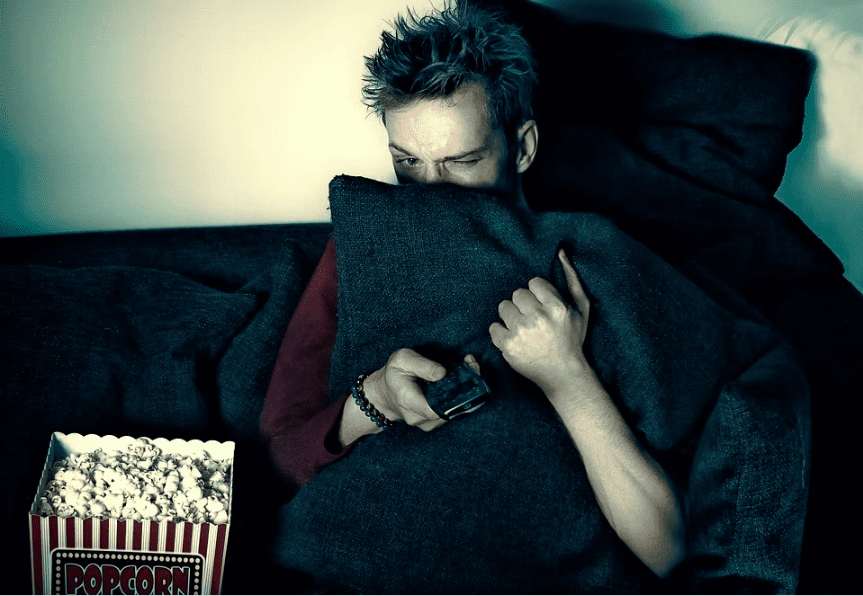 Hayley struggled with anxiety in the form of fear – of water, dogs, carnival rides, and many other things – from a young age, but wasn’t diagnosed until her mid-20s. Despite her fears of regular things, she was drawn to trailers for horror movies and often found herself perusing their covers at the video store (back in the stone ages) and listening to her parents watching The Twilight Zone from the safety of her bedroom.

As the internet became a thing, Hayley read about things that scared her on Wikipedia, then slowly began to actually watch the movies and play the games that were created to give people anxiety.

For her, she found only “a strange feeling of calm and relief when I reached the other side. Of catharsis.” 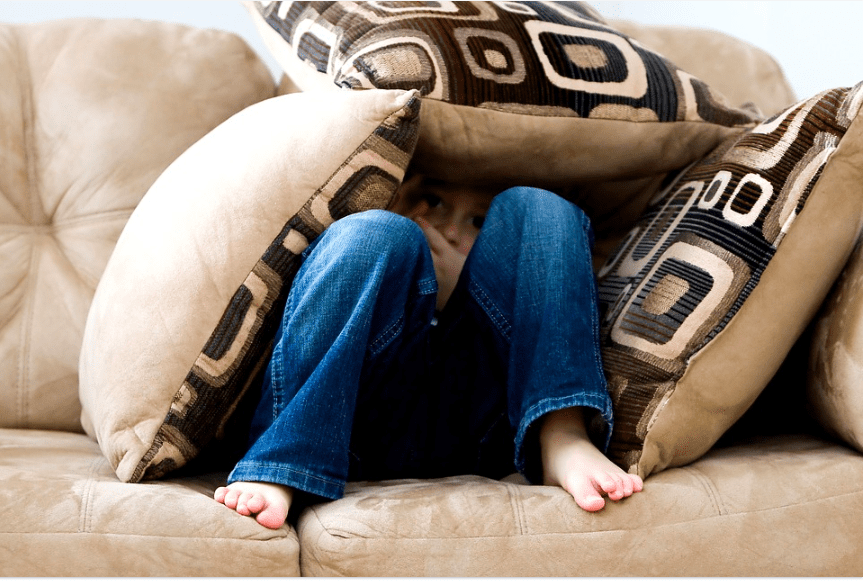 Catharsis, as defined by Aristotle, is a “purging of the spirit of morbid and base ideas or emotions by witnessing the playing out of such emotions or ideas on stage.”

Marc Wilson, a professor of psychology at the Victoria University in Wellington, has some thoughts on why the concept works so well for people like Hayley.

“First, distraction is an effective way of managing one’s negative emotions (including worry) and movies can do that if you immerse yourself in them. Another benefit that comes specifically from horror movies is that people typically feel better afterward by virtue of a contrast – they get to leave the movie theater not having been eaten by zombies.”

Dr. Dougal Sutherland, a clinical psychologist at the same University, is willing to go one step further, comparing the idea to elements of cognitive-behavioral therapy or CBT, which is a common clinical treatment for anxiety. 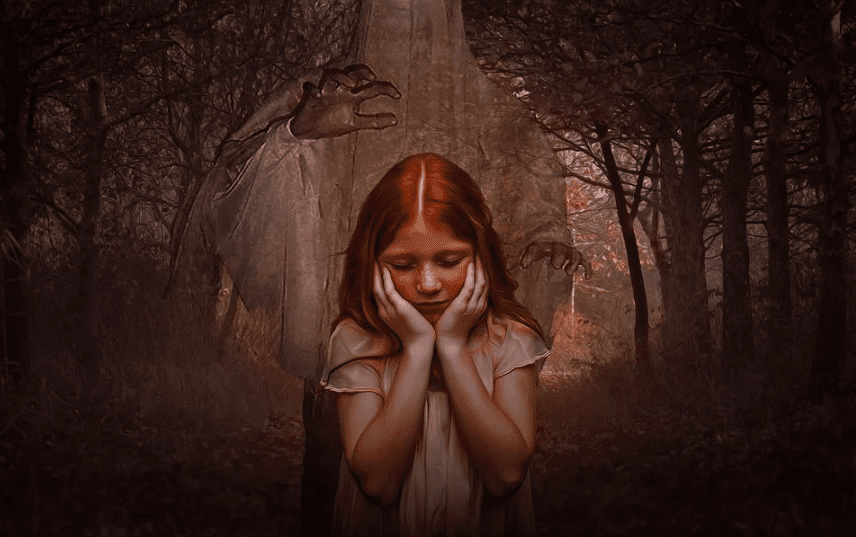 “The basic idea is that people are deliberately getting into situations where they feel anxious and then learning that they can cope with this feeling and that their worst fears aren’t realized. CBT helps people with anxiety learn that they are worrying too much about something that is unlikely to happen and a core part of CBT for anxiety is setting up “behavioral experiments.” These experiments involve people identifying situations that make them anxious and then putting themselves, gently and gradually, into these situations. The outcome is that people learn that their anxiety is manageable and that it reduces over time.”

What this means for people like Hayley who suffer from anxiety symptoms like a vague feeling of emotional wrongness, chest pain or tightness, and unexplained fears, is that as the adrenaline kick they get from a jump scare fades, the relief spreads to their natural anxiety as well as the stress manufactured by the film.

“The physiological arousal generated by the suspense lingers some while after and as a result positive experiences are heightened,” Professor Wilson sums up. 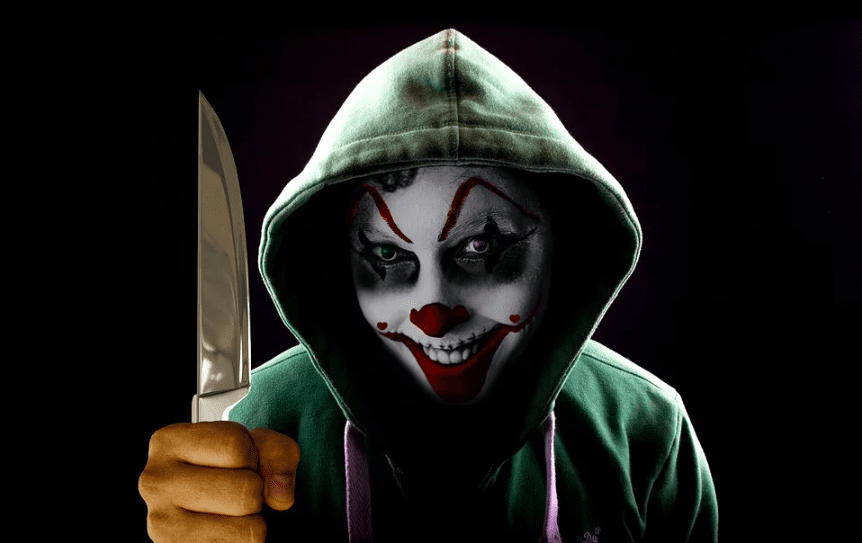 If you’re thinking this all sounds very interesting, there are a few things to consider.

First, if you have any specific phobias that are tied to your anxiety, you’ll want to avoid movies that cover those topics, warns Professor Wilson.

“For example, if you’re anxious about spiders then going to see Eight Legged Freaks may not help. Unless it’s part of therapeutic use of systematic desensitization which involves progressively exposing people to something they fear, say to learn that they won’t die by looking at a toy spider, and building up to watching Eight Legged Freaks.”

For others, watching horror movies might not be helpful at all – it might be the opposite, actually. According to Dr. Sutherland,

“There is a danger in using horror movies with someone who is not into them or unaware of what’s happening as watching these sorts of movies could be quite unsettling and even traumatizing for some. As a teen/young adult I suffered from anxiety and freaked myself out on a number of occasions watching scary movies. Sometimes after watching them I couldn’t sleep very well and still felt agitated the next day. I’ve largely conquered my own anxieties but tend to avoid watching horror movies now because of the feeling they give me.”

If you’re someone who already likes these movies, or is inexplicably drawn to them, then both professors think watching them could be a valuable self-help tool.

As with every type of self-medication and coping mechanism, watching horror movies to relieve your anxiety symptoms should only be used as part of your treatment regimen, and isn’t a substitute for proper medical care, therapy sessions, and medication as prescribed.