Is This Guy Awful for Telling Their Family a Secret About His Brother’s Wealth? Here’s What People Said.

The battle of the s*xes is always raging…and when there is money involved…well, let’s just say that some men get their egos hurt if they aren’t the big breadwinner.

And this story from the “Am I the *sshole?” page on Reddit puts that whole phenomenon front and center…and it got kind of ugly.

Let’s take a look at what happened.

AITA for telling my family that my brother earns less than his wife?

He’s always wanted money but never wanted to work for it. His wife; (F 30) who we’ll call Jane, is awesome. Me and my wife are so happy he’s with her because she’s just very kind and funny, and has become a good friend to us as well as family member, particularly with my wife.

She has a high paying job. She live in a nice house, buy nice things, have a nice car etc. My brother has a pretty normal job, he’s not very ambitious and now that he’s with her, he’s content with that (which is totally fine by the way).

Jane has told my wife a couple times that she doesn’t mind paying for everything, but that he doesn’t like to talk about it in public, and get defensive if she mentions anything that she bought when friends or family are present, I have noticed this too.

Well, my parents got vaccinated so we all went there for dinner. It was a great time. At one point, my dad is taking about finances and saving, etc. And my brother mentions the house “he bought” and the car “he bought”, me and my wife are rolling our eyes, Jane looks a little disgruntled.

And then, at one point he says “yes we have a simple relationship with money, I make it, she spends it!” Like a joke, but joking about the wrong thing if that makes sense, because he’s alluding to the fact that this is true.

So I say “Luke, that’s a bit unfair. Jane is the bread winner in your household, and she bought the house and car didn’t she?” He laughs and says “no!” So I don’t bother after that.

He called me later and blasted me saying it was none of my businesses and so what if she bought those things. I said he should be a little more appreciative and respectful.

We haven’t spoken since, and my mum and dad are annoyed that I said it because it made dinner awkward.”

This person said that the guy totally brought this on himself. 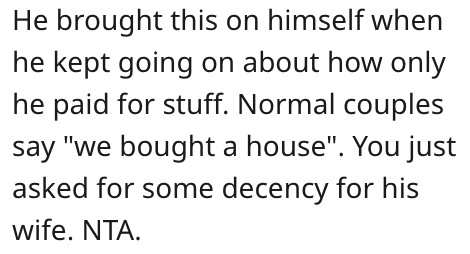 Another Reddit user called the brother a misogynist and that he’s acting out because he’s embarrassed about his situation. 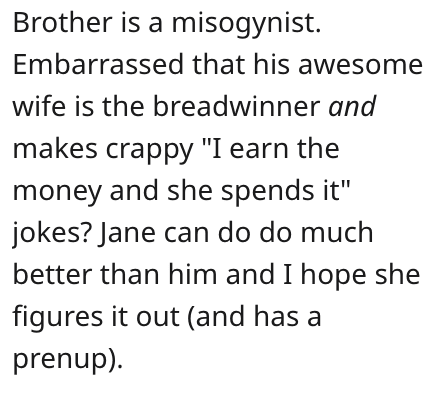 This individual said that the man is discrediting all of his wife’s hard work. Not cool! 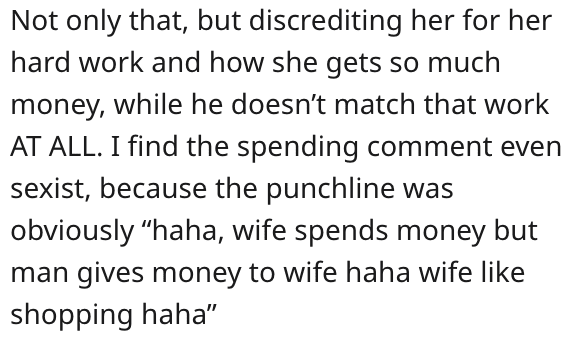 This reader said that he crossed two lines in his actions. Two very big lines.

Lastly, this person said that if she were in this wife’s position, she would not be happy at all. This guy sounds like a real jerk… 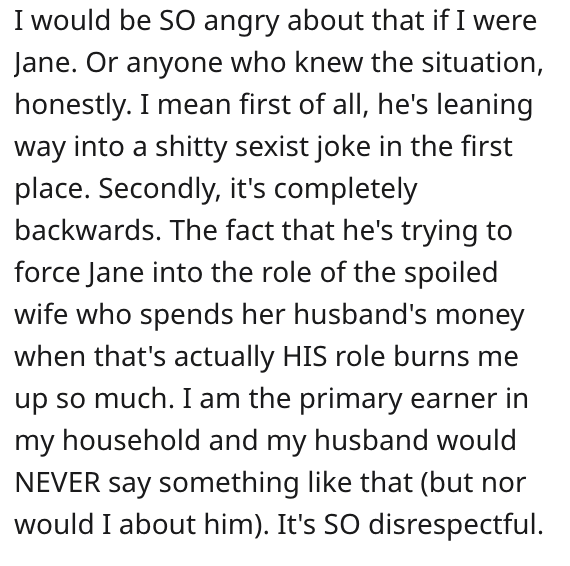 Was this person way out of line for telling their family about this?

Sound off in the comments and let your voice be heard!