JRR Tolkien’s Lord of the Rings trilogy, along with The Hobbit, have inspired a cult following among readers and movie-goers.

Personally, I enjoyed the movies but never finished the books. (I’m sorry 😬)

And I haven’t joined my mother in semi-annual rewatching events.

So when a Tumblr user wrote an essay about the death of Boromir my first thought was which one was that again? (Don’t stone me 😬)

And my second thought was is he the one that’s in EVERYTHING? (I looked it up. Sean Bean, and yes.)

But a lengthy, viral thread from Tumblr made me want to go back and rewatch, and give Boromir his due.

SPOILER ALERT – Boromir dies. And the topic of this particular essay is the reason why his death gets more meaningful the older we get.

The user @letmetellyouaboutmyfeels believes this is because Boromir is the every man, the character we may not have aligned ourselves to as children, but who we most identify with as adults. 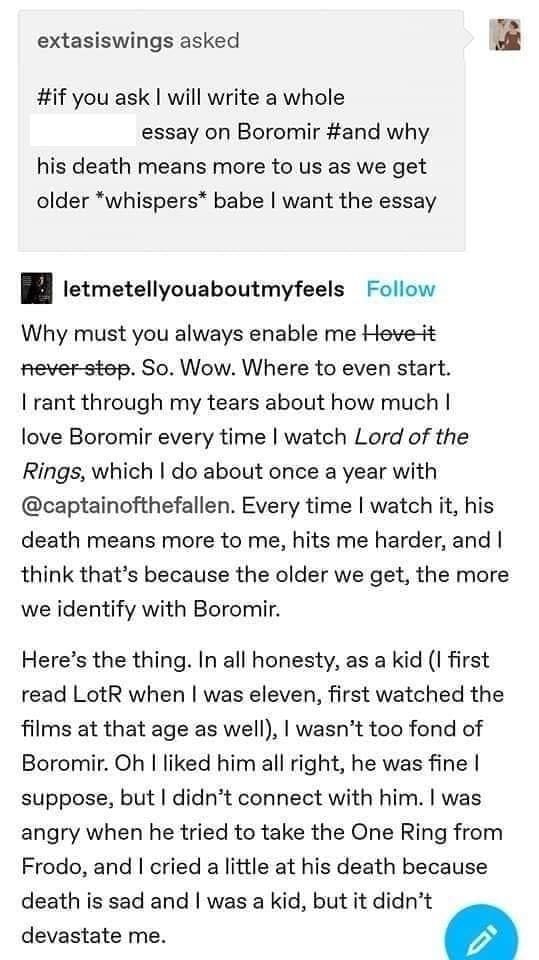 It’s an interesting critical analysis worthy of any film studies or literature class, but the user didn’t stop there.

They explained why life beats you down until you are more aligned with the every man than your hero Aragorn. 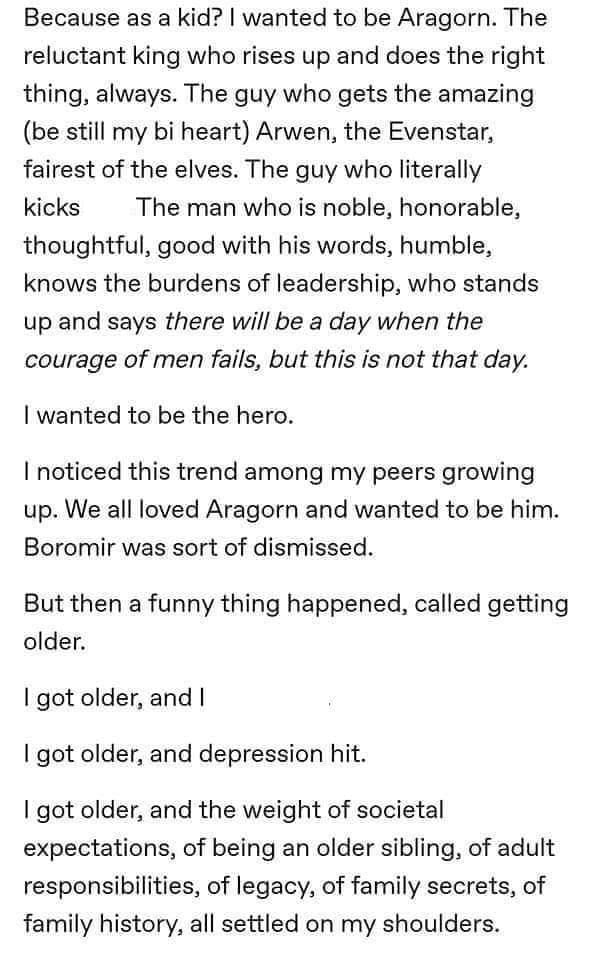 The user, @letmetellyouaboutmyfeels, has lived to see some stuff, it seems. 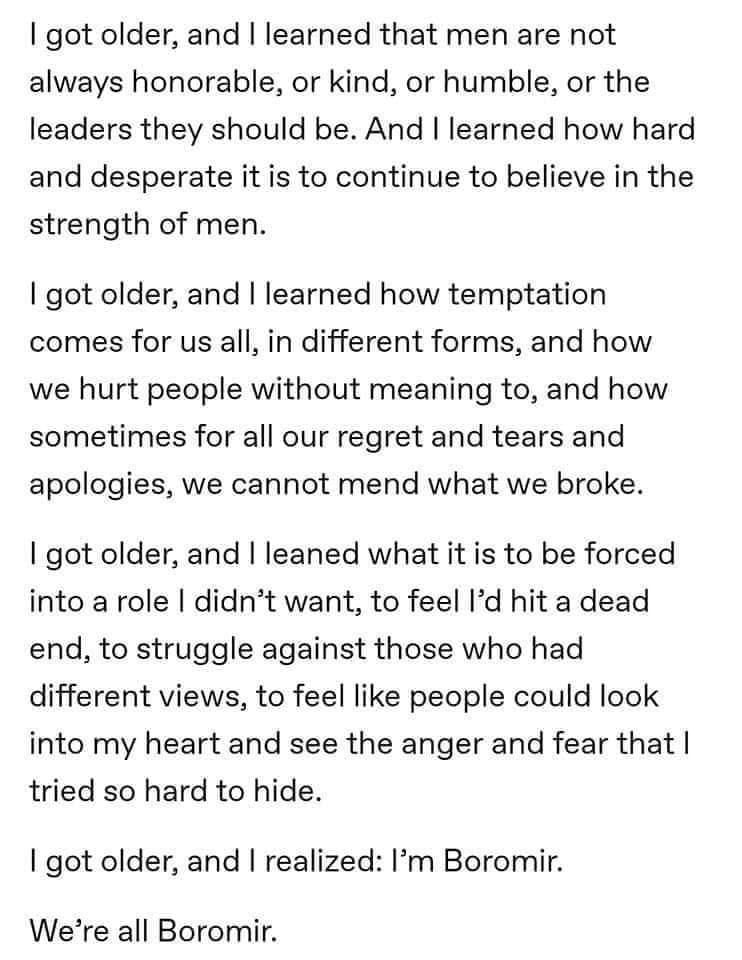 And when it comes to Tolkien, they know their stuff.

Tolkien embraced the archetype. There’s a reason we all love Aragorn, and it’s not just because of Viggo Mortensen and his beautiful face.

Aragorn from Lord of the Rings is literally my ideal man in every way pic.twitter.com/9UfpFFyYT1 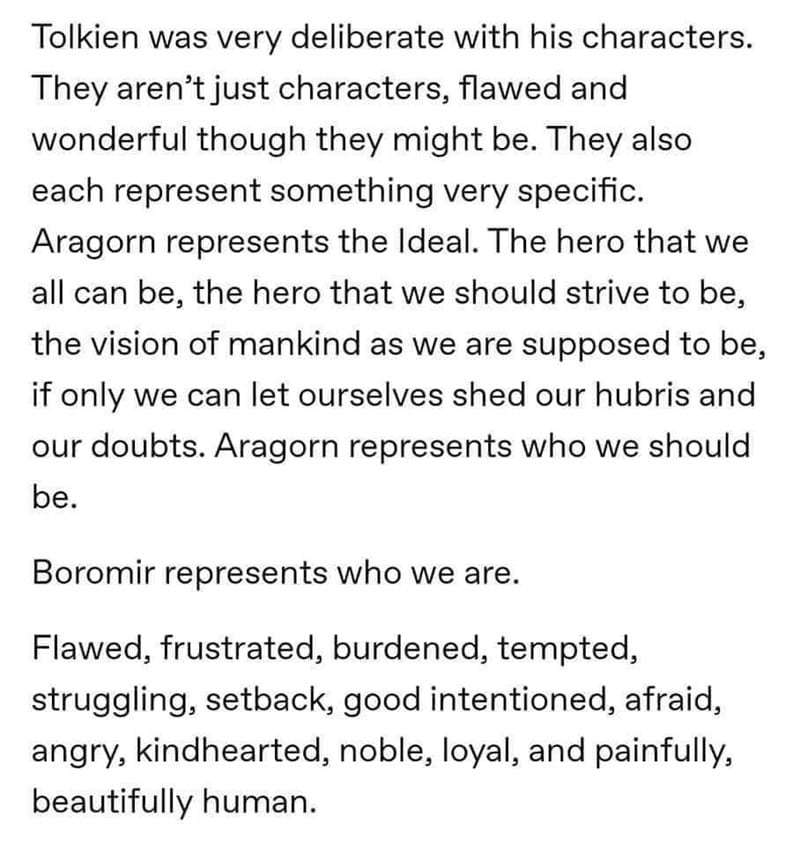 But Boromir served an integral part of the story. He has agency. 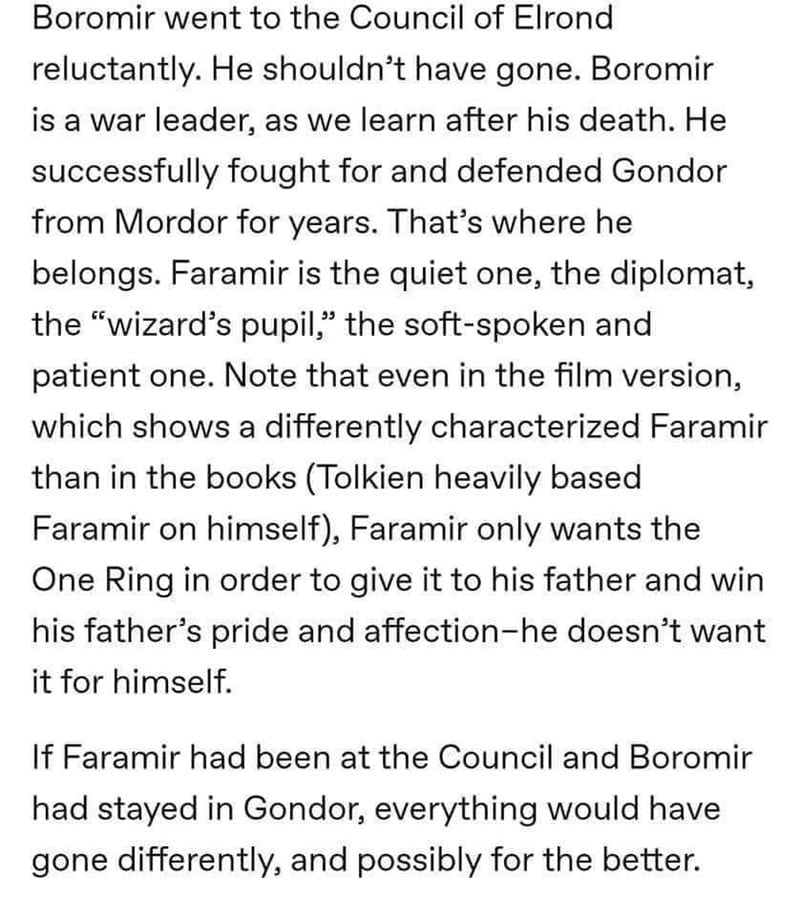 Then @letmetellyouaboutmyfeels brings it all back into context of modern life.

They explain how like Boromir we tend to be–stuck in cycles of expectation, trying, and failing, and just being human. 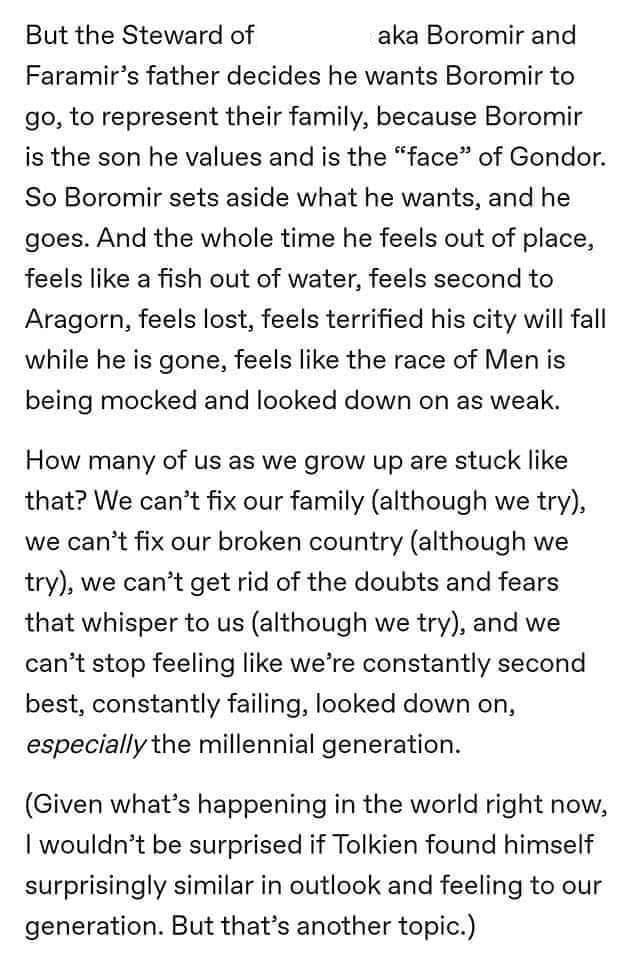 But, they also point out, that there is strength in Boromir’s frailty, in his humanity. 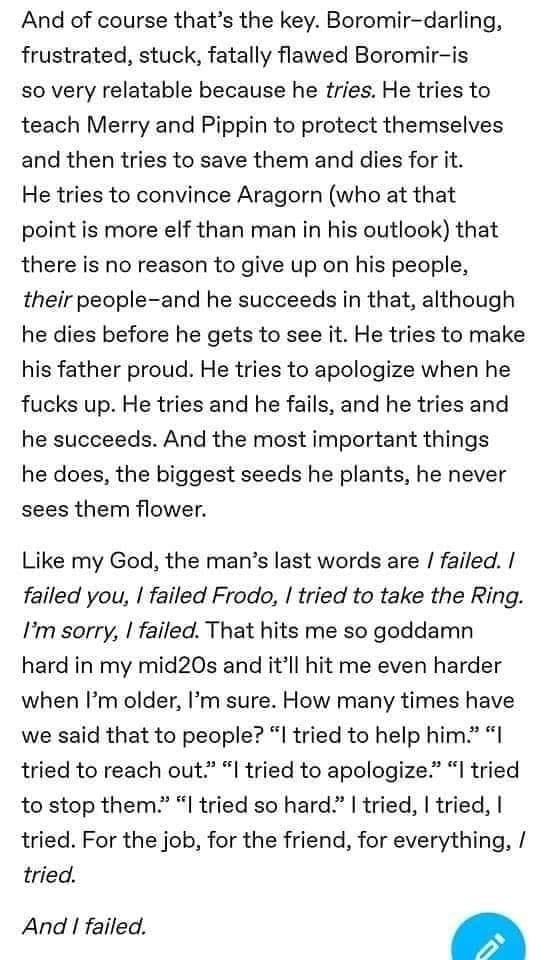 @letmetellyouaboutmyfeels brings it all full circle, showing how Boromir was instrumental, before his death, in handing things off to Aragorn.

They describe how even in his last act, Boromir–human that he was–ensured the final success of the Fellowship. 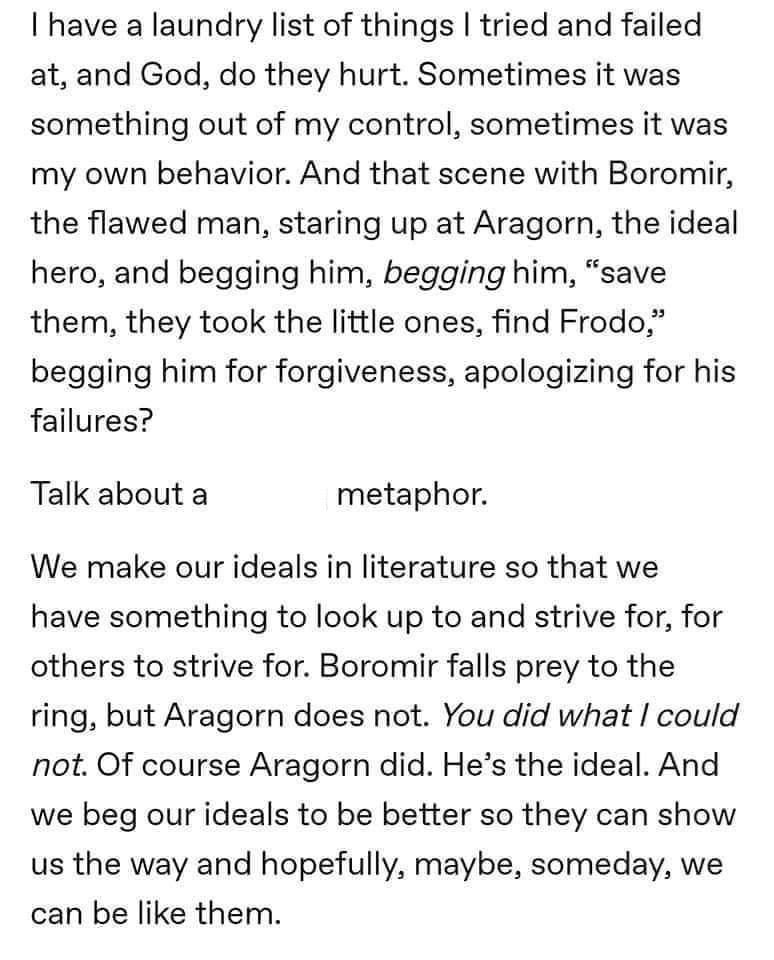 They write about the evolution of their heroes, from childhood to teenage-dom to adulthood, and how in adulthood we lose sight of the ideal, and begin to focus on our own humanity and failures.

I love Boromir. He’s so perfectly flawed and, in many ways, far more interesting than the other purely good characters. pic.twitter.com/0uE3lkDfpX 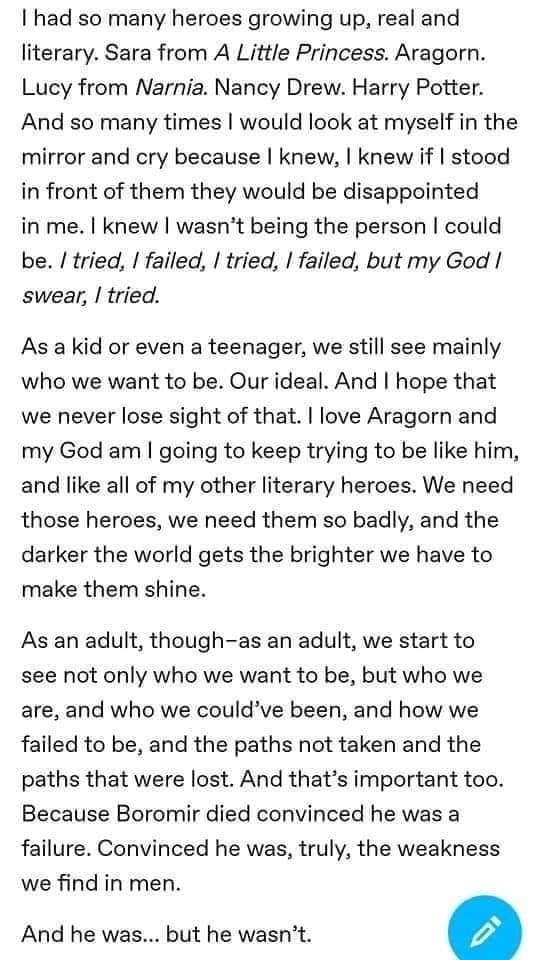 They point out again, all of the good that Boromir did, and all of the ways that Aragorn and the others might not have succeeded without him.

Although he was his own worst critic, as are we all, Boromir was not a complete failure. He had success too. 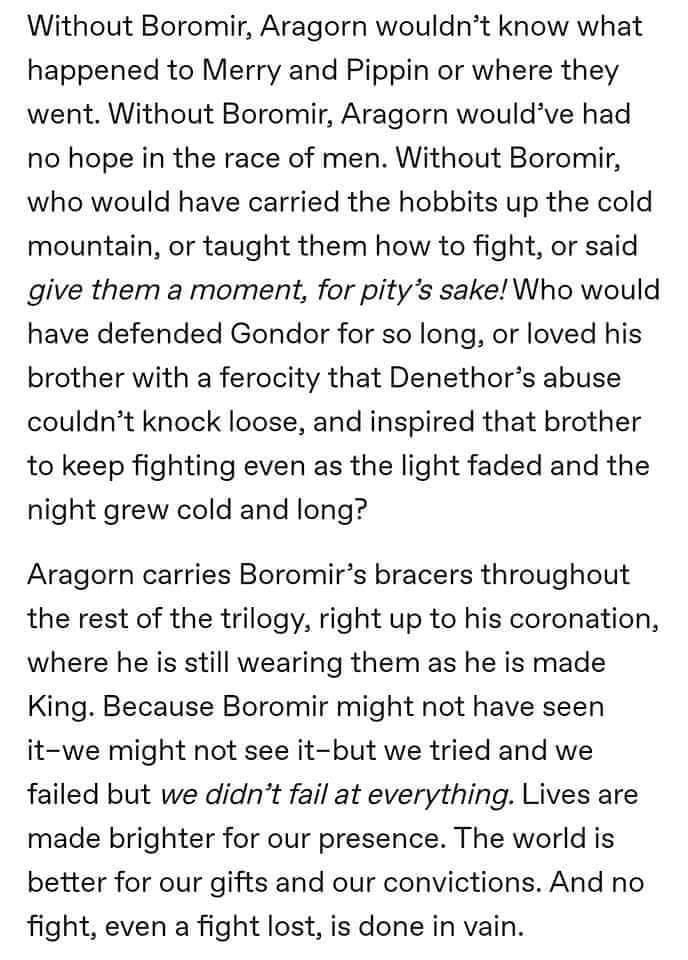 And that is why his death might hit much harder now than it did as a child.

As a kid, you were probably thinking “Darn, but thank goodness it wasn’t Aragorn! He can still save the day!”

As an adult, you look at Boromir, and you just might see yourself. 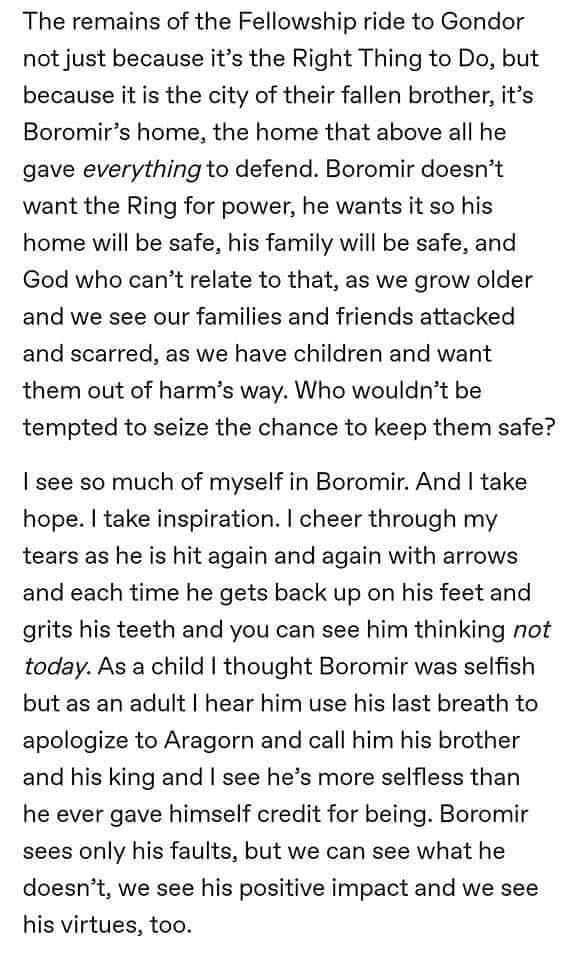 Watching Boromir die hurts every time. He is the best of us and the worst of us. #lockdownLoTR pic.twitter.com/okf4ei9bWh

The essay took quite a turn when you realize that it was written by, not someone in their 40s or 50s, but by someone mid 20s who has seen a lot of life.

But there’s a lot of truth in it. What about you? Does Boromir’s death get you every time?