It’s always good to add some new wholesome knowledge to your life.

Here’s extra wholesome facts from the folks on the AskReddit subReddit to hopefully make your day a little better.

“What is the most wholesome fact you know?”

“Someone, while handling coral, discovered that when shattered, coral will grow back and mature at unprecedented speeds.”

“That’s great to hear! Can you give me your source?”

“I’d really like to read more about that.” –schuelli27

“Of course! Because there are actually quite a few sources, I had a bit of trouble narrowing it down to the best ones but here is a well written article and a PBS video on it!”

“IIRC, the US ‘accepted’ the donation, but let the cows stay in Kenya as the shipping would have been enormous.” –Little-Jim

“To add to this, they started paying the village who offered the cows to look after them on America’s behalf.” –HoundOfNoHouse

“Gorillas make up cute food songs and sing louder for the food they prefer.” –halinw191

“Today I Learned (TIL) I’m a Gorilla” –silkblackrose

“I saw one today with its big bumble bee bum sticking out of one today and thought it was dead. Around 40 minutes later it woke up and got back to bumble beeing.” –inselaffenaktion

“They are resting as they’re tired. They can die from dehydration!”

“It is often advised to leave a teaspoon of water and sugar out for bees to drink so they can quench their thirst. It is important that we do this.”

“Always remember to feed the little fellas who spend their entire lives feeding us.” –OmenedRaven

“Mentioning Mr. Rogers in a thread about wholesomeness is cheating.”

“And since we’re cheating anyway, I’ll take the opportunity to share his quote:”

“‘When I was a boy and would see scary things in the news, my mother would always say to me “look for the helpers. You will always find people who are helping”‘.” –pm_me_n00d

“There is an episode of Daniel Tiger’s Neighborhood (current animated spinoff of Mr. Rogers) where dad tiger says this to his son, Daniel, and I tear up every time!” –mrsgarrett27

“To add to this wholesomeness: When he would feed his fish on the show he would announce that he was doing it because the mother of a young blind girl wrote him saying her daughter was worried that the fish were not getting feed, so, he started doing it to let her know the fish were ok.” –whiteknight804

“Baby Beavers look like teeny adult beavers when born. Before you go ‘well duuh’, think of all the other animals – birds, humans, dogs, cats – that look similar but not identical to their adult versions.”

“Also they have fwooopy tails.” –Redditor

“Also guinea pigs. Every time I see a newly hatched guinea pig my brain cannot compute that it is EXACTLY the same as an adult guinea pig only smol.” –FlippityFelts

Dogs Are, Of Course, Ridiculously Wholesome

“Dogs, when aggressively playing with them, will sneeze to let you know that they are just playing and don’t want to hurt you.” –Agent_301

“My dog sneezes whenever she’s excited. Or going out the door. Or going for a wee. Or a poo. Or anything, really.”

“Maybe everything is exciting?” –t-scotty

“My dog does this when she gets excited about meeting someone familiar, I always thought it was something uncontrollable TIL” –SvenskBlatte

“My trainer told me that some breeds do this as a way to “clear their head” when getting excited or flustered. A person might pause for a moment and shake their head but a dog sneezes to reset themselves.”

Dolphins Are Great Too

“Dolphins will assign other dolphins a sound, kind like a name, and even if the dolphin doesn’t know who said it’s ‘name’ it will still respond.” –lobo_Cop

“It’s even cooler than that. The dolphin’s ‘name’ is called a signature whistle.”

“The calf does not copy the whistle, instead it uses it as a model. Calves tend to model their signature whistles after those of adult dolphins who they do not spend much time with.”

“This leads to the signature whistles of individual dolphins in the same pod sharing certain characteristics, almost like a family name.”

“When two dolphin meet in the open ocean, they emit their signature whistles to each other. From this they decide whether they are friends of if they should fight or run.”

“So with this information, we know that dolphins can use vocalizations to reference others. And they have a sense of permanence and continuity of others.”

“The question is do dolphins use vocalizations to reference objects, and will they do so without being taught by a human. The really cool thing is that is the basis of language.” –tweakingforjesus

Seals Are Kings Of Wholesome

“When seals feel safe and content, they do this thing.” –subjection-s 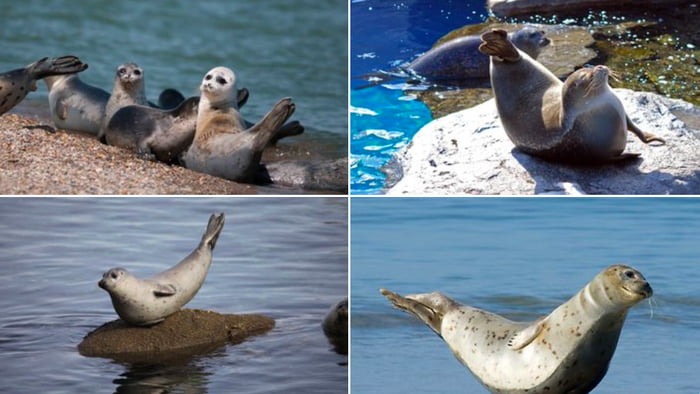 “They not only become banana, they become happy and calm bananana.” –Redditor

“I actually went home on Friday for the day and was on the train from Edinburgh when I saw some seals on a rocky shore doing this. I feel happier knowing this” –CaledonianWarrior

Keeping Others From Making The Same Mistake

“There was a guy who jumped from the Golden Gate Bridge when he was 19 and immediately realized he’d made a huge mistake. He miraculously survived the fall.”

“Thanks to help from a sea lion he was kept afloat and it swam around him until he could be rescued. He is now a mental health advocate and has gone on to save who knows how many people from making that same leap.” –morbidnerd

“Kevin Hines is the guy’s name. He was a guest speaker in a class I once took.”

“Fascinating to listen to what was going through his head as he fell. Instant regret, reaching out for the rail as he fell back away from it.” –DangerBrewin

“I am not a religious person, but this really sounds like a divine intervention.” –Turhaturpa

“It made numerous attempts including stuffing one into his face, and got anxious that he wasn’t taking it. I wouldn’t be surprised if it was maternal behaviour, but quite wholesome that they do it to another species.” –inselaffektion

“I like to think that in its own way, that sea lion has also helped save all those lives along with the kid who survived the lowest point in his life.” –morbidnerd

Hopefully these wholesome facts helped improve your day, even if just a little.

Winn Sioux Christnot-Peters is a writer/web designer and aspiring librarian based in Northern Maine. When not writing or in class, they devote much of their time to multiple non-profit organizations, largely focusing on LGBTQ+ rights and animal welfare. During rare moments of free time Winona enjoys video and tabletop games, as well as various nerdy fiber crafts such as crocheting (mainly amigurumi Pokémon, cat toys, and blankets) and counted cross stitch.

Sorry. No data so far.

© Copyright UberFacts 2021
Back to Top
Popular In the Community