Person Said People Can’t Be “Woke” if They’re Wrong. Are They an A-hole?

You sure hear the word “woke” thrown around a lot lately.

Which is a good thing because it means people are becoming more aware of people different from themselves and they’re learning to become more accepting.

But is it always a good thing? Especially when people are using it the wrong way?

Let’s take a look at this story from the “Am I the *sshole?” page on Reddit and see what happened…

“AITA for telling my roommate’s GF that she’s not woke if she’s wrong?”

“Husband (28M) & I (25F) are ethnically Chinese from a SEA country living overseas.

We rent a house with SO’s college friend who moved his gf (Anna) in during lockdown & she’s been with us ever since (with landlord’s permission & she pays her share of bills). They’re not Asians, which matters.

Anna was initially nice, but started acting very weirdly a month after she moved in:

Telling SO & I that we can practice our ‘real’ religion (which apparently is Buddhism, not Christianity even though SO & I come from Christian families). She even bought incense (which gives me migraines) & a random Buddha statue. We politely explained to her that we’re not Buddhists, but she continued to insist & promised that she didn’t mind.

Telling SO & I that we can speak our ‘real’ language cause she overheard SO’s family talking to us in a mix of English & Cantonese. I explained to her that I can’t speak Cantonese (SO can) even though I can understand it.

She was, for some reason, really disappointed in me & said that I was throwing my heritage away. Plot twist: my own father is only comfortable speaking English.

Buying raw internal organs for SO & I to cook, even though we don’t eat those. I told her we don’t eat that (not our thing), & she was again disappointed.

She told us she read that there were lots of nice recipes & maybe we haven’t found the right one to remind us of home. SO told her he’s never eaten it ever in his life, & I’ve never liked it. She was really upset, but had to toss it since no one was gonna eat it

Chinese New Year was when things got really really weird. She started ordering ‘decorations’. I wouldn’t mind, but she had ordered hell notes (the ones burned for deceased ancestors). I immediately told her to stop pasting them all over the walls because they were weirding me out.

She ordered banners with SO & my name on it (some bast*rdization of our legal English names) but they were written on white banners (again, for deceased people). I told her to please take it down. She got upset (again), but then ordered kabuki masks. I told her that those masks were not Chinese, & she just snapped. She started yelling at me that I should be helping her & not critiquing what she was doing. I told her:

CNY is not a big deal to me, so I wasn’t planning on decorating but if she had asked, I would have helped

I told her I don’t understand her fixation with us. She said she wanted to surprise me & SO, that we’ve been so ‘colonised’ we’ve forgotten our roots, & that we should be embracing our culture.

I told her it was a nice gesture, but she needs to stop forcing stereotypes down our throats. She could have just asked & she’s not being woke when she’s getting everything wrong.

She burst into tears & brought in her bf. He understood where I was coming from, but thought I could have been nicer. SO stands by me, & now things have been tense, but I’ve been tolerating this for a while now & it was getting on my nerves.”

This reader called the woman a racist, plain and simple. 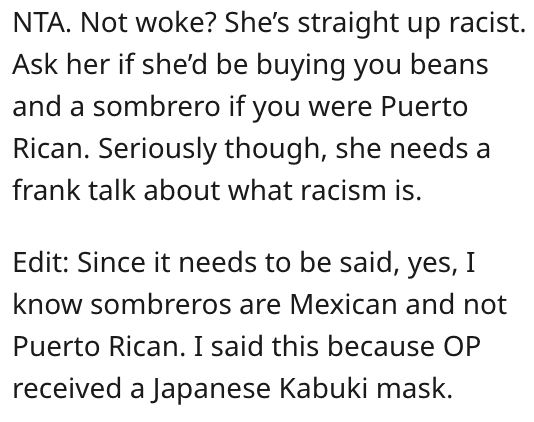 Another Reddit user said that the woman is not only being racist, but is “fetishizing her identities.” Let that one sink in…

Another reader pointed out that the woman is pretty ridiculous on multiple levels.

This person really hit the nail on the head! 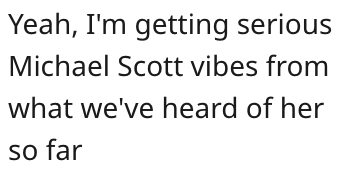 Finally, this person said that the woman in the story reminds her of someone from her own life…and that they enforce harmful stereotypes. 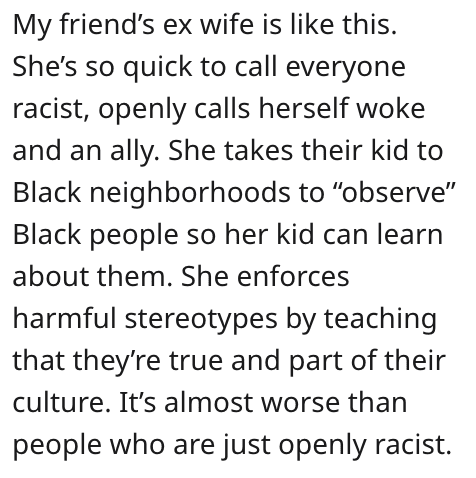 Now we want to hear from you.

Was this woman an *sshole in this situation?

Tell us what you think in the comments. Thanks!