Southwest Airlines Apologizes to a Passenger After Employee Mocks Her Daughter’s Name, “Abcde”

Ya know, I’ve seen some “weird” names in my day. Heck, i watch enough professional football to know that people can sometimes have… interesting… names (like Ha Ha Clinton-Dix, Taco Charlton, or D’Brickashaw Ferguson). I try my best not to be too judgmental. Apparently, the folks at Southwest don’t feel the same way…

Traci Redford, a Texas resident, complained that a Southwest employee mocked her daughter’s name. She said, “The gate agent started laughing, pointing at me and my daughter, talking to other employees. So I turned around and said, ‘Hey, if I can hear you, my daughter can hear you, so I’d appreciate if you’d just stop.”

Oh, I forgot to mention her daughter’s name. Are you ready for this? Abcde. It’s pronounced “Ab-city.” Yes, you read that correctly.

The employee apparently took a photo of the girl’s boarding pass and posted it online, which is how Redford found about it and reported it to the airline.

Name shaming? This Texas woman claims a @SouthwestAir agent made fun of her 5-year-old daughter’s name as they were preparing to board their flight at @JohnWayneAir in Orange County. 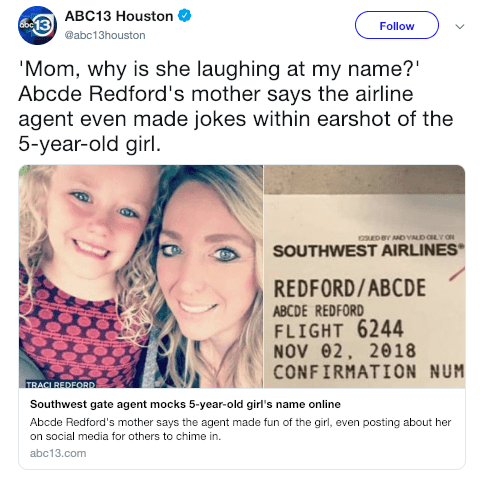 Southwest eventually apologized to the woman and Abcde, saying “We take great pride in extending our Southwest Hospitality to all of our Customers, which includes living by the Golden Rule and treating every individual with respect, in person or online.”

You’re probably not going to believe this, but there are several hundred people in the U.S. with the name “Abcde.”

Wow, we live in strange times.