This Colorized Footage From 1911 New York Is Really Amazing

We love to see images from the past, I think because it makes us feel more connected to the humans we came from, however many years are in between us.

That said, photography is a fairly new inventions, which means the older the image, the harder is can be to make out the lines and faces and expressions. 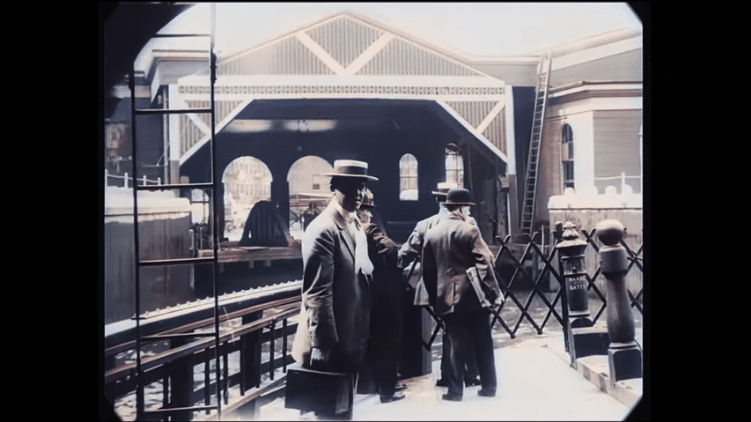 Until now, that is, when our modern technology has finally reached a point where it can not only make the images less grainy and blurred, but can soak them with color, too.

This particular footage was shot more than 100 years ago by the Swedish production company Svenska Biografteatern when they shot extensive street footage in New York City.

First, YouTuber Guy Jones cut and slowed the frames down to a more natural speed, and the resulting A Trip Through New York City (below) is the result.

Footage taken of New York City has been colorized and upscaled using artificial intelligence (AI) more than 100 years after it was shot, and the results are astonishing.

Then another YouTuber, Denis Shiryaev, upscaled and colored that footage using neural networks. He boosted the framerate to 600 frames-per-second, increased the image resolution to 4K, and restored sharpness, all of which resulted in a pretty stunning look into the past.

He added the color using an open-source AI tool called DeOldify. It’s available on GitHub and is used for retouching pictures and videos using Generative Adversarial Networks (GAN). The tool uses neural networks – the generator and the critic – and is more convincing than any similar program has been in the past.

“This comes from setting up training of the colorizing model to involve a second model – the ‘critic’ – that basically is there to ‘criticize’ the colorizations and teach the ‘generator’ to produce better images. Because the ‘critic’ model is also a neural network, it can pick up on a lot of the nuances of what makes something look ‘realistic’ that simple methods just can’t.”

This type of use for AI tools has become super popular (because it’s admittedly pretty cool). There’s also a restored version of The Arrival of a Train at La Ciotat Station, shot by the Lumiere brothers in 1896 – supposedly the original reel resulted in audiences at the time stampeding out of the cinema to get away from the lifelike event.

Though most film historians think that description was probably something of an urban legend, the footage would have seemed otherworldly at the time – and now, restored and colorized, it kind of feels groundbreaking all over again.

If this is your jam and you didn’t even realize it, there are a bunch of other videos on YouTube, so please, get lost.

We can all use a pool of things that make us happy, or inspire us, or just simple make us sit back in awe of the people who came before us, now and then.

As a film student who got her degree *mumble mumble* years ago, I find this absolutely stunning – it almost brings a tear to my eye.

What do you think about these programs, and a full-color glimpse into the past?