No matter what side of the political aisle you belong to, chances are most of you would agree that America’s healthcare system, as it currently stands, is pretty broken. Even if we can’t all agree about what the right solution may be, we definitely agree that it could certainly be better.

The fact is that, when it comes to healthcare, America actually lags behind the rest of the civilized world. We spend more exponentially more money to get significantly less coverage.

Most other first world countries offer government-funded universal healthcare – and that is also true in Taiwan, where one Kevin Bozeat has been living as an ex-pat. But unfortunately, he didn’t qualify for their healthcare and had no American health insurance, either, when he found himself super sick and in need of a trip to the emergency room.

He sucked it up and let his roommate call him a taxi, figuring he’d work out the payment when it came due (the way most of us regular people do here in the States). 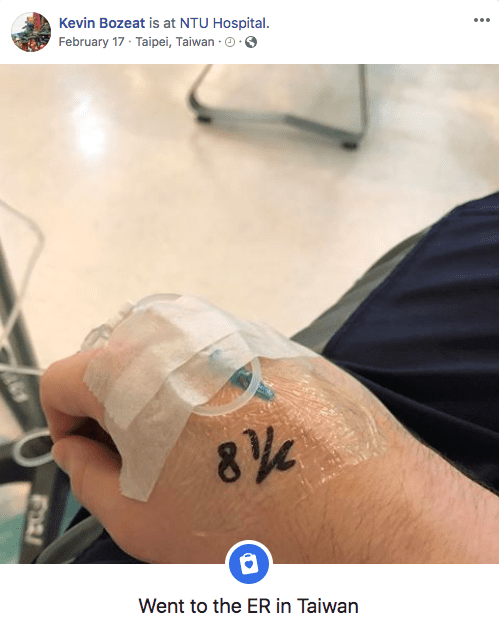 tl;dr: His experience was awesome and even with no insurance, it cost him $80.

Of course, since this is the internet in America, people had to try to find every which way to prove that his experience was singular, or reasons why it wouldn’t work in the States, or to insinuate that Taiwan is somehow a poor, third world country (it’s not; their GDP is higher than Denmark’s).

So, Kevin did some legwork for us in the form of arguments against all of the “good points” people made about his original post.

He acknowledges that no system is perfect, but quotes the Ministry of Health in saying that “…the Taiwanese government believes that healthcare is a right for all of its citizens, rather than a privilege for those who can afford it.”

Everyone in Taiwan is covered (along with foreign permanent resident) is entitled to coverage regardless of employment status, and no citizen goes bankrupt due to medical bills.

It sounds like a utopia, but it’s not – most of the world has figured out how to make it happen. And according to Kevin, it’s time for his home country to stop making excuses.